A lot of lacrosse coaches and lax insiders often liken their sport to basketball, given the transitional aspects, the offensive and defensive schema and the idea behind putting the ball in the net. Given that thinking, Rye’s 5-0 third-quarter explosion against Yorktown in Thursday’s Section 1 Class B title game was akin to a 12-time NYS champion Mount Vernon basketball run; complete with easy layups and slam-jam eruptions.

Leading 7-6 at the half, top-seeded Rye ripped off seven unanswered second-half tallies for a 14-6 title triumph, its second in a row over second-seeded Yorktown, the 40-time Section 1 champ who have now played second fiddle in four-straight tournaments.

En route to the title tilt, state-ranked (No.7) Yorktown (10-9) knocked off rival John Jay CR, 10-9, in a wild, come-from-behind win in the sectional semis while state-ranked (No.3) Rye (16-3) eliminated Mahopac, 11-3. Seven-time sectional champion Rye advanced to the NYSPHSAA tournament for the sixth time in school history (no states in 2021 due to pandemic).

Yorktown was in it to win it throughout the first half, taking several leads throughout the first half, including a 3-2 lead after good-looking Husker sophomore Ryan Vogel tickled twine at 10:59 of the second quarter. It was Vogel who also set up Yorktown All-American Harry Griff, who went behind the back, just before the half, ending a three-goal Rye run while sending Coach Tim Schurr’s Huskers into the break brimming with short-lived momentum.

That’s when Rye turned into Mt. Vernon, breaking the halftime huddle with conviction, assuming control of the X, dominating possession and putting Yorktown on its heels. Caden Whaling, Owen Kovacs (4G), Tyler McDermott (3G) and company went on, perhaps, the greatest run in Rye lax history, doing so on the back of Colgate-bound Garnet FOGO Johnny Hartzell, who had an epic performance at the X, taking 20 of 22 draws.

Yorktown senior G Vito DeBellis (16 saves), who carried the Huskers at times throughout the first half, was under siege throughout the second half, in which there was five minutes of balanced, scoreless action to open the third quarter before Rye issued the five gut shots in under seven minutes to take a 12-6 lead into the fourth.

Kovacs dumped two goals in 40 seconds and the blitz was on. McDermott followed. Kian McCarthy (3G) then sniped from 15 yards out before Whaling (1G, 1A) concluded the dizzying display.

“Yorktown is really well coached, they are gritty, Vito Debellis is a great goalie, and Harry Griff can ball out,” Rye Coach Steve Lennon said. “I think we came in with some anxious energy, but we were able to ride the waves. Having Johnny Hartzell adjust at halftime was huge. When he is winning face-offs, and Jack Garnet and the defense are making stops, it allows us to go on runs. That’s what this game was all about. With so many injuries to some of our top players this year, it allowed us to learn how to share the ball and play within the offense. With our rangy shooters, and solid inside guys it makes it hard to stop if we are going to take it at the X. We’re excited to be able to go practice together again this weekend. This is the best time of the year.”

Griff finished his All-American career with a hat trick, but the Huskers were prone to carelessness with the ball throughout the fourth as they tried to mount a comeback.Yorktown  junior A Jack Duncan and sophomore M Vogel each had one goal and an assist. Senior Sava Makarenko scored Yorktown’s first goal.

Against John Jay, Vogel provided a glimpse of his promising future, finishing with three goals and three assists, including the game-tying goal with 1:15 remaining in the fourth and the game-winning assist 39 seconds into overtime to set up the biggest goal of senior James Solazzo’s career, saving the Huskers from semifinal elimination.

It was John Jay who started this skid of four-straight championship setbacks, beating Yorktown in Section 1 Class B championship games in 2018 and 2019. Rye, which will drop down to Class C next year, has done so consecutively now as well, sending Yorktown home without a title for just the 10th time since 1972. Seven-time NYS champion Yorktown has appeared in all 42 championship games since 1980 (no tournament in 2020 due to COVID), going 35-7, including 17 in a row from 1980-1996, but the four-year span without a title is perpetuity for anyone and everyone associated with the green and white and founder Charlie Murphy’s legacy.

No doubt, the Huskers will do everything in their power to reclaim the title in 2023, but they will have to be much better than they were down the stretch against Rye, who will be joined by John Jay CR in Class C next year.

“I think we really need to go to work in the off season and I think we all know we can get back on top,” Duncan said. “We just need to put the work in.”

Semifinalists Mahopac, which will lose the services of All-Section seniors Mike Harney and D Sean Massett, plus FOGO Chris Evans, will return a slew of its skill players, along with G Tommy Jacobellis, and will be among several Class B teams to take a strong run at the Huskers, who do lose quite a few key seniors to graduation. A healthy Lakeland/Panas outfit will also pose a threat to Yorktown, which faces an uphill battle without a bonafide FOGO in the pipeline, the loss of its top scoring threat in Fairfield-bound Griff and the need to replace Siena-bound DeBellis between the pipes. Nothing is given, but Mahopac, which many will dub the favorites in 2023, will be taking aim at its first sectional title since 2011 while Somers, a well coached and budding unit, should continue its ascent among the upper crust in Class B if the youthful Tuskers’ top players remain on board. “For sure, we’ll be one of the favorites next year,” Massett said of his Indians. “This team has the talent to contend for sure. Defense for next year will be a little rocky, but the offense, besides Harney, is all returning. I cannot wait to watch those guys compete for a championship.”…

The four classifications (Class A, B, C & D) lacked any sort of drama or suspense last week, the margin of victory being five or more goals in all four championship games… Apologies to repeat Class A champion Scarsdale for looking past them all season. Didn’t see the unranked Raiders knocking off No.8 Mamaroneck, 12-7, probably because we didn’t see them play all year and just looked at box scores #MyBad… Hats off to top-seeded, state-ranked (No.5) Briarcliff on its sectional title three-peat after routing second-seeded, state-ranked (No.4) Bronxville, 14-4. Not sure who informs the state pollsters about Section 1 teams, but there’s no way any Section 1 club should be ranked ahead of Coach Al Meola’s Bears. That goes for every classification. It would be shocking if the Bears don’t get past Section 9’s O’Neill and the Section 2 champ (either Schuylerville or Stillwater/Mechanicville) and aren’t playing in the state semis on June 8 at SUNY Albany against the Long Island survivor – perhaps state-ranked (No.1) Cold Spring Harbor –  with the winner moving on to the state finals on June 11 at Hofstra U. #GoodLuck! 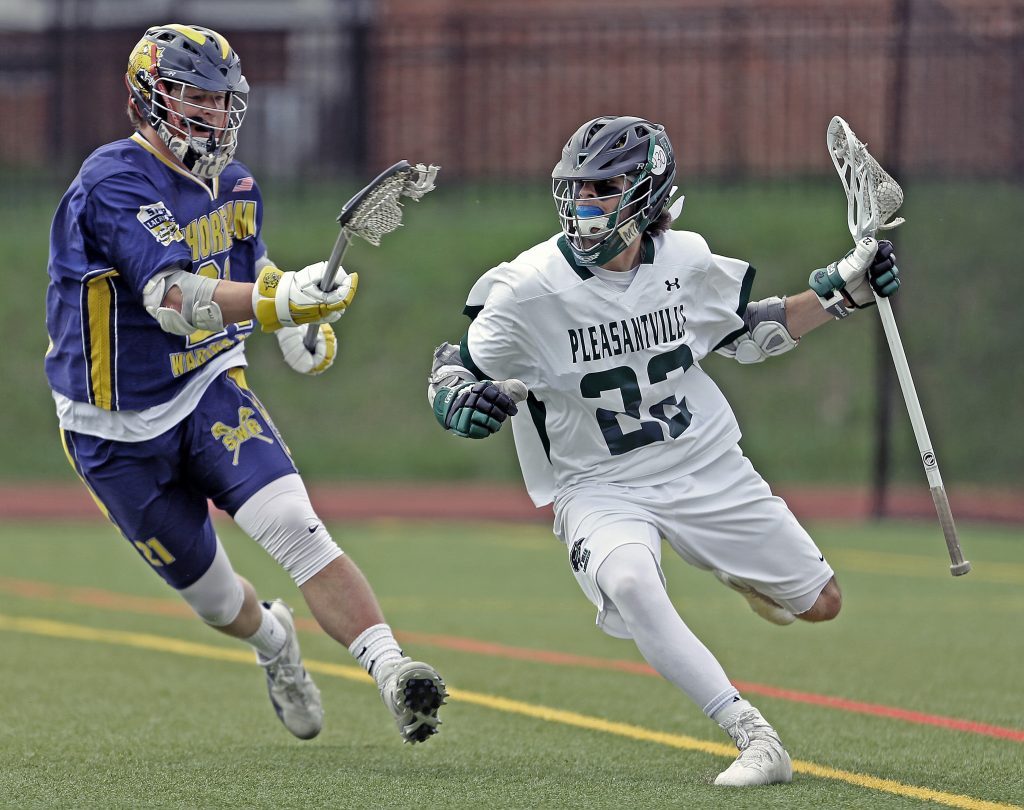 Westlake Hangs On to Beat the Panthers in Playoff Opener