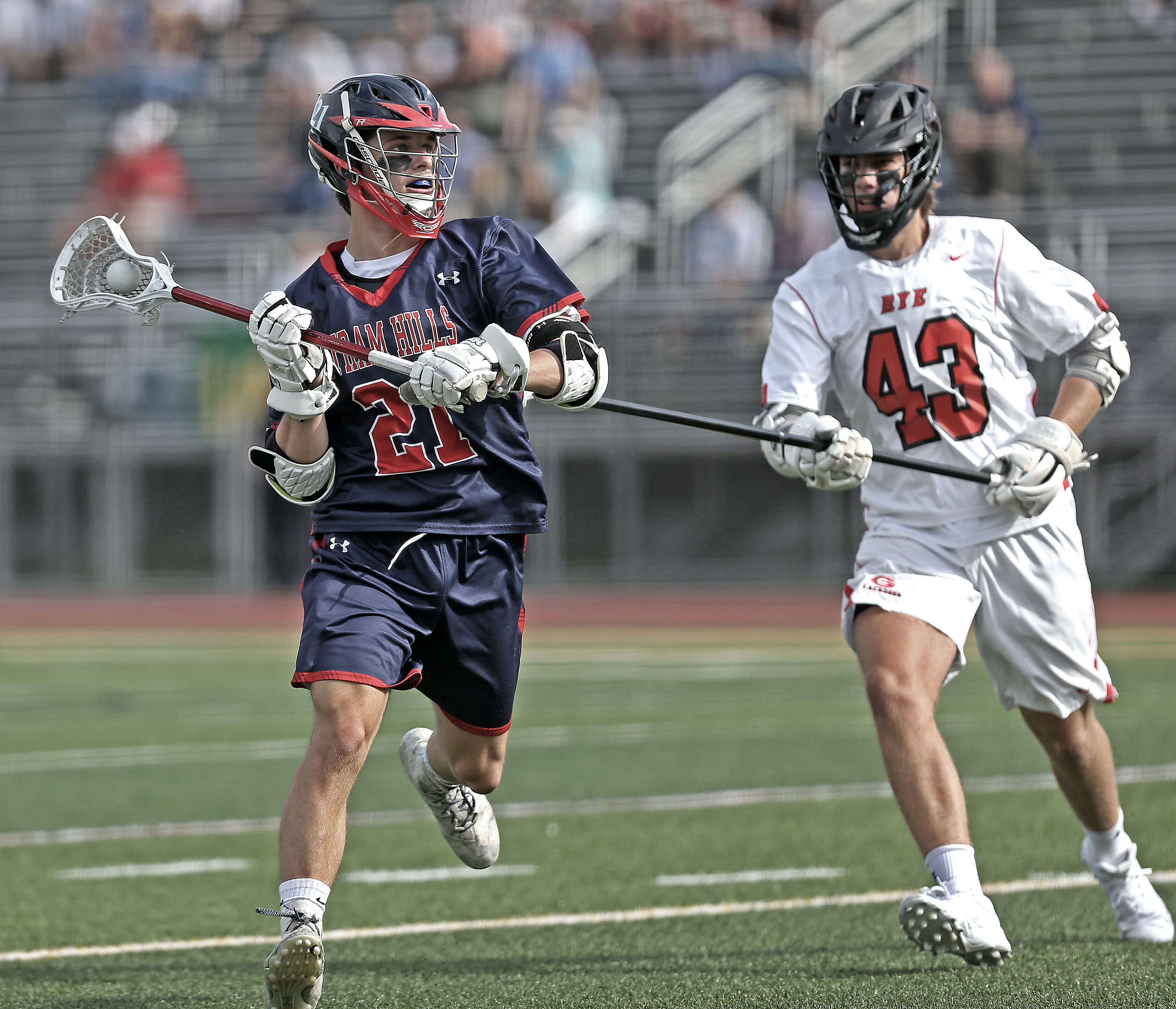 Will Mykytiuk of Byram Hills sets his sights on the cage in the Class C sectional final vs. Rye.

Scoring goals seemed to be a cinch for the Byram Hills boys’ lacrosse team in its first two playoff games. The Bobcats piled up 33 of them in lopsided wins over Edgemont and Nanuet.

But putting the ball in the back of the net still figured to be a daunting challenge for them on Friday afternoon in their Section One, Class C championship showdown against top-seeded Rye.

Unfortunately for the Bobcats, it certainly was.

The Garnets held Byram Hills scoreless over the final three quarters, overcoming an early 2-1 deficit and scoring seven unanswered goals to capture the title with a convincing 8-2 victory. Liam Hurley and Tommy DeCaro scored two goals apiece, Johnny Hartzell dominated the battle for face-offs and the highly regarded Rye defense did the rest, bringing a disappointing end to the Bobcats’ quest for a sectional title.

“Hats off to Rye, they played a great game,” said Bobcats head coach Michael Johnson, shortly after his team’s season concluded on the turf at Lakeland High School. “It was tough to get into our offensive flow. Their three long poles are really tough guys and they play like workhorses out there. So we had a hard time with them. Turned the ball over a few times and I think from our perspective they moved at a speed we couldn’t handle very well.”

The second-seeded Bobcats had already been given a taste of what to expect from the stifling Rye defense when the teams met late in the regular season just a couple of weeks ago. This time, with much more at stake, they battled to a scoreless stalemate over the first half of the opening quarter before a goal by Danny Fitzgibbons gave Rye the early edge with 5:20 left in the period.

But soon after, the Bobcats’ Casey Begleiter, who had 11 assists in the 18-4 quarterfinal rout of Edgemont, scooped up a ground ball near midfield and raced down the right side of the field toward the cage. He found teammate Alec Geller open in front for a point-blank finish that tied the game with exactly three minutes to go in the first quarter.

With 1:43 remaining, Ben Mautner, who had eight goals against Edgemont, gave the Bobcats a 2-1 advantage, moving to his left and then sending a one-hopper into the cage. But the goal by Mautner, a senior attackman, turned out to be the last one Byram Hills would score this season.

Just eight seconds later, the Garnets’ Hartzell, after gathering the ball on the ensuing face-off and faking a shot, fired the ball past Bobcat goalie Griffen Rakower to again knot the contest. The score then remained even at 2-2 until Rye’s Hurley tallied his first goal of the day in traffic from a wide angle to the left of the cage with 5:35 to go in the half.

A couple of minutes later, Hurley scored again from just about the same exact spot on the field, giving the Garnets a 4-2 lead they maintained until halftime arrived. Rakower, who finished with 16 saves, had helped keep the Byram Hills hopes alive with several outstanding saves, but the start of the second half would turn out to be disastrous for the Bobcats.

Rye freshman Caden Whaling scored on the Garnets’ first possession of the third quarter and just 19 seconds later, after another Hartzell face-off win, DeCaro provided his first goal by stepping to his right and firing the ball past Rakower into the far side of the net. Just 90 seconds into the second half, Byram suddenly faced a four-goal deficit. It grew to five when DeCaro scored again just seven seconds before the end of the third quarter.

“It was frustrating,” said Johnson, “to look up at the scoreboard in the third quarter and say, ‘Wow, we haven’t scored a goal since the first.’ We couldn’t win face-offs and we kind of got out of our rhythm a little bit.”

The Bobcats didn’t have the ball much in the fourth quarter and the only goal came from the Garnets’ Jack Bartlett with 9:23 left on the clock and Byram down a man. Whatever wind had been left in the Bobcats’ sails all but disappeared after the two goals by Rye early in the third quarter.

“Our guys got frustrated,” Johnson admitted. “It was one of those things where we came unraveled a little bit and guys wanted to take things into their own hands. That’s where we got ourselves into trouble. You know, it’s got to be six guys in the box working together and working the ball around. Basic lacrosse.”

Just three days earlier, the Bobcats had overwhelmed Nanuet 15-4 in the semifinals as Begleiter scored five goals, while Mautner, Geller and Hayden Fruhling added two apiece. But it was hardly the sort of big-game preparation Byram needed for its championship task against the Garnets.

“Yeah, we played two teams that don’t have the skill Rye does,” said Johnson about the Bobcats’ playoff path. “So it is hard to prepare. And then we were overwhelmed by their speed. But I’m so proud of our guys. They gave their heart today. That’s all we can ask.”