Arts & Entertainment The Examiner
April 8, 2022May 4, 2022 Martin Wilbur Rockefeller Park Preserve
We are part of The Trust Project

Over the past two years, hundreds of thousands of visitors took advantage of the open space at Rockefeller Park Preserve, the opportunity to safely spend time outside after being cooped up at home.

What had been missing at the park, however, was the schedule of art exhibits in the park’s popular gallery that have often featured local or emerging artists, many of them focused on aspects of nature.

“We’re all, in one way or another, trying to find some peace of mind, some peace within ourselves and bring it into our gallery because we have a lot of individuals trying to get away from everything that’s going on, and just to be able to come to a place where we can find some relief, just relief, and I think we’ve done that,” said gallery curator Audrey Leeds.

Last Saturday, Gutschmit, who had more than a dozen sculptural paintings in the gallery for the exhibit, and Garber, a photographer whose current works feature birds, were on hand for the reception for the exhibit.

Gutschmit’s and Garber’s artistic endeavors come as a later-in-life career, both having retired. Gutschmit, who has always loved art, spent many years in international marketing while Garber was the director of The New York Foundling Hospital, a New York City child welfare agency.

The move to Tarrytown two years ago, where Gutschmit’s husband was raised, helped inspire her artwork with the daily view of the Hudson River. The life of the river is always changing, Gutschmit said, which has inspired her to create so much artwork that not only has she needed to rent storage space locally, but she has rented a studio in Tribeca where she now commutes to do her painting.

Before Gutschmidt retired from the corporate world, she could never imagine waking up at 4:30 or 5 o’clock each morning. Now she can’t wait for the sun to rise to start painting.

Her Riverwood collection is being shown at the gallery’s current exhibit.

“The Hudson is just amazing,” Gutschmit said. “The way it changes every day, looking at the water, the lighting. It’s just so magnificent, and of course, my husband wanted to live by the Hudson because he wanted to fish and kayak, but I’m not really an outdoorsy person. It’s, for me, just looking out my window, that’s just good enough of an inspiration.”

Garber had always been an amateur photographer, snapping images of people, nature and landscapes. But after his retirement, he enrolled in the International Center of Photography, which offers photography education programs.

For the Rockefeller gallery exhibit, Garber focused on close-up images of birds. He was inspired by his wife, Stephanie, a Rockland Audubon Society member. The couple lives in Blauvelt.

“She was on the (Audubon Society) board and so she loves birds, and I always loved them, too,” he said. “But it was more her interest and that was something I could do with her.”

Garber said he looks for shots that capture the personality or the character of each bird, because similar to humans, they’re all different. Then the right lighting and a healthy dose of luck also come into play.

Two of Garber’s photographs in the exhibit were taken at Rockefeller Park Preserve. His wife helps identify the species.

Since the pandemic, the Rockefeller State Park Preserve has become one of the most popular state parks in New York, said Peter Iskenderian, the park’s manager. In each of the past two years, annual attendance has swelled by an eye-popping 50 percent, from 400,000 to about 600,000 visitors, he said. The park has 1,800 acres and 55 miles of carriage roads.

Last Saturday, the parking lots were overflowing and a long line of cars was parked on the shoulder of Route 117.

“Our trails are 16 feet wide, they’re all carriage roads,” Iskenderian said. “People can social distance on our fields, so that’s what made it an ideal location, plus we have Phelps Hospital right next door and we have all the doctors and nurses coming here after their work, during their lunch break just coming in walking.” 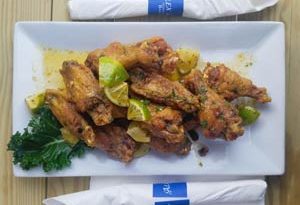