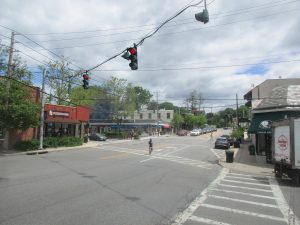 Part of the area where the Manville Road streetscape project would be completed. Estimates now peg the original scope of work at as much as $4 million.

Rising construction costs that could cause an overrun of more than $1 million will result in changes to the Manville Road Corridor Improvement Project.

At last week’s Pleasantville Village Board work session, Richard Williams, senior principal engineer for Insite Engineering, advised the board to limit part of the project’s scope by changing materials in certain areas because of anticipated higher bids resulting from steep price escalations in the construction market.

“We’re looking at somewhere between $3 to $4 million, which is a lot higher than the funding that’s available,” Williams said. “We needed to reevaluate the scope to push the pricing down.”

Last July the village approved a resolution to spend up to $2.6 million to pay for renovating Manville Road from Memorial Plaza to Tompkins Avenue. That number includes the $1.5 million federal grant that will be used toward the project, which is administered by the state Department of Transportation (DOT), and requires a mandatory 50 percent match of $750,000 from the village. The design was approved by the DOT in August.

Williams said he consulted with construction industry professionals for an updated estimate based on higher costs.

“What we are hearing on the street is that costs are rising because there is so much work out there but there are also labor shortages,” he said.

The current plan calls for a full corridor enhancement where sidewalks are replaced and new granite curbs are installed along with the replacement of trees.

Details of the initial proposal also included minimizing crosswalk lengths, creating a pedestrian refuge and eliminating the slip lane that funnels traffic from Memorial Plaza onto Manville Road. Sidewalks will still have to be made ADA compliant.

To offset higher construction costs, Williams suggested to village officials that the   municipality use its own manpower to eliminate the slip lane, replace the granite curbing with less costly concrete and limit the number of new sidewalks. The cost of the slip lane work would be minimal and would be funded through the village’s annual budget, Morrissey said.

“Instead of replacing every panel of sidewalk in the corridor, we can focus only on the corners that require ADA upgrades,” Williams said. “All these things aren’t major changes but they do help. I don’t think we will see a radical decrease but the goal is to try to keep the focus between the two- to three-million-dollar range and continue to keep that number down to as low as we can go.”

The DOT needs to agree to changes. Williams said he recently met with agency representative to discuss revamping the project to keep its costs more in line with available funding.

He also filed for an extension to the end of 2020 to receive project authorization, which will allow the village more time to revise the proposal and put the project out to bid. The original deadline was at the end of this year. Officials have been eyeing a spring 2020 start date for the project.

“We are pushing the DOT to get us feedback as soon as possible,” said Morrissey. “We’d like to go out to bid by this winter.”

Pleasantville Mayor Peter Scherer said the essential elements for the streetscape project would remain in place. He was also hopeful the changes won’t delay the project.

“Up until recently, we all felt it was a comfortable budget,” Scherer said. “Now we are painfully learning that in the current environment it isn’t.”

Williams predicted that the project’s timeline hinges on the final DOT approval of the traffic signal at the Memorial Plaza-Manville Road intersection. Once the signal is approved, the DOT will have to install it, test it and make sure it operates correctly.

“We are not going to be able to eliminate the slip lane until that signal is up and is in operation. That won’t happen overnight,” Williams said.

He said one of the advantages of scaling back the sidewalk replacement would be fewer interruptions for nearby businesses and residents.