Skip to content
The Northern Westchester Examiner
December 18, 2019 Rick Pezzullo
We are part of The Trust Project

On Tuesday night, a day before the U.S. House of Representatives began debating two articles of impeachment against President Donald Trump, activists gathered outside Senator Charles Schumer’s office in Peekskill as part of nationwide “Nobody Is Above the Law” rallies.

The local event was one of more than 600 actions attended by more than 100,000 people that took place nationwide in all 50 states and Washington, D.C.

“Despite the inclement weather and questionable roads last night, people came from Westchester, Putnam, Rockland and Duchess Counties to demand our elected officials hold the president accountable for his lawless actions while in office,” said Ricann Bock, an organizer of the rally.

The mobilization was part of a massive, grassroots effort to ensure Congress hold President Trump accountable for using military aid to pressure Ukraine to interfere in the 2020 elections. Protestors demanded that the House of Representatives fulfills its constitutional duty by impeaching the President and that the Senate remove him from office for attempting to rig the 2020 elections. 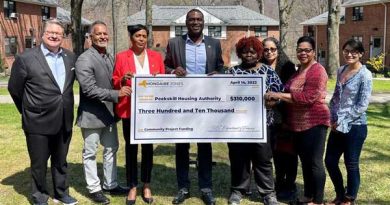 McKenzie Delivers First State of the City Address in Peekskill

Mother of Son Killed in Accident Pushes for Median on Bear Mtn. Parkway