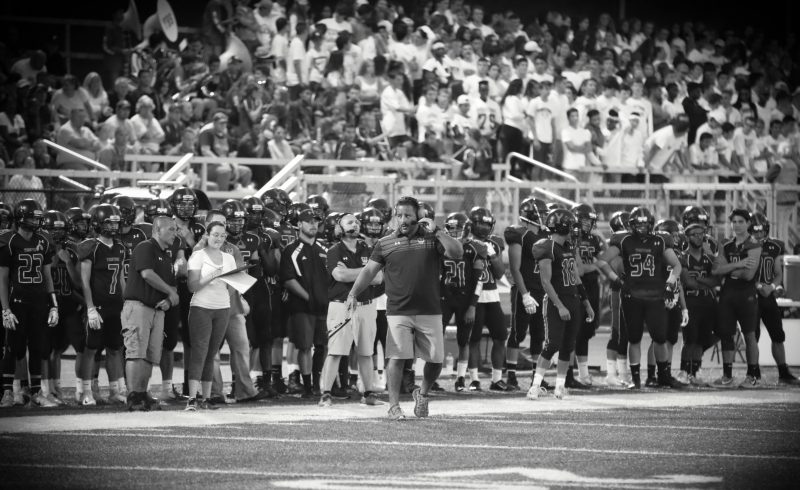 Yorktown Coach Mike Rescigno (center) will miss days like these but family time is his main concern now, thus his sudden resignation Tuesday.

It’s hard to say good-bye, no matter what the situation, so you’ll have to forgive former Yorktown football Coach Mike Rescigno for being choked up upon his unexpected resignation last Tuesday; just four days after the Cornhuskers’ disappointing 41-7 season-ending loss to Rye in the Section 1 Class A championship, Friday, November 8th. The desire to see his children excel in their respective sports/activities, coupled with the inordinate amount time it takes to be an exceptional varsity football coach, made it difficult but necessary to resign.

“I’m forever in debt to my coaching staff for their immeasurable sacrifice,” Rescigno said. “To the extended Yorktown Football Family and The Crop (Yorktown fabled student body): It has been my sincere honor and privilege to be called your head coach for the past 15 years. You are the greatest fans in Section 1. Through a whirlwind of emotions, I am humbled by the incredible response of past players and families. These past 15 years have been the most fulfilling and rewarding years of my life, but I need to be there for my wife and kids. They are the cornerstone of my life.”

Mike ‘House’ Rescigno — the former Carmel High and Hofstra University standout — is a giant figure, both literally and figuratively in the hallowed halls of Yorktown High, where he presided over all things football the past 15 years, doing so with no flare or fanfare… just productivity and class personified. His 100th win – a 20-7 semifinal win over then-reigning Section 1 champion John Jay – Cross River – came at a time when his oldest son is just about ready for varsity action along the Class AA gridiron at Arlington High School, where they’d be nuts to not find a spot on the Admiral staff for the former Yorktown coach that produced three trips to the Section 1 finals since 2016 and a NYS runner-up status in 2017.

So, when this scribe broke the news to John Q. Public shortly after 2:00 p.m. Tuesday, phones were blowing up all over the place. Why would Coach Rescigno leave like this? Well, his family is of the utmost importance and his son, a legit two-player – is ready to blow up, and, he’s contemplated this before, knowing he would want and need to be at his son’s games. Who will replace him? Yorktown A.D Rob Barrett assures the process to find his replacement will begin quickly; as the recent season has just concluded, and it’s like Black Monday in the NFL with all the coming and goings on the Section 1 circuit. Who’s interested? Who wouldn’t be, outside of the most established coaches in Section 1? Yorktown, with five sectional titles, three state championship appearances and two state titles since 1993, has long been a football hotbed with its staunchly committed, multi-sport athletes.

We’ll here names like former Yorktown standout Paul Santavicca, the current coach at Port Chester, kicked around, and Rob Cappelli, the former longtime Lakeland coach and current Cornhusker assistant, plus others on the current staff. Know this much: There will be no shortage of potential candidates, despite the pressure to succeed and the high expectations within the community. Yorktown has had just three head coaches since 1989 – Ron Santavicca, Dan Callahan and Rescigno – and all three have copped Section 1 titles, so yeah, there have been big shoes to fill before, but the Huskers have manned up each time and found a suitable replacement. Indeed, the show must go on.

“He’s the best there is,” Barrett said. “It’s completely understandable and admirable to want to spend more time with the family, but it doesn’t make it any less significant of a hit to our program. We’ll open it up and hope to get the best possible replacement ASAP.”

Twitter blew up last Tuesday, with no shortage of reverent commentary.

From @YorktownLacrosse: Congrats @House55Mike on a great career. You have helped to change lives for the better in Yorktown. Big shoes to fill my friend.

From the fabled student body @THE__CROP: @House55Mike has given the team, school and community a huge reason to be proud of the program. We ALL will never forget what he has done! #100thwin #ourhouse.

From @skenn13 (former Yorktown baseball coach Sean Kennedy): They don’t come better than @House55Mike! He has done an incredible job during his 15 years and I completely understand the desire to spend more time with your family. Congrats my friend.

From @Saltyhistory (fellow Yorktown teacher Seth Altman): As a teacher in the building, I cannot say enough about how @House55Mike has built a quality program that does things the right way. Happy for Mike, but a sad day for the entire Yorktown sports program.

From @KDJmedia1 (legendary local sportswriter & sports enthusiast): Mike Rescigno is a great coach and his son is soon entering high school. Think it’s impossible for a dad to coach at a school while his son is playing elsewhere.

From @coachStevensBFH: Yorktown and Section 1 losing a great coach. All the best to Mike and his family.

Good luck, my friend, ’twas a hell of a ride…

OOPS, THEY DID IT AGAIN — Can’t think of another athletic program that I’ve covered across the last three-plus decades like LAKELAND field hockey. Winning one state title is hard enough, but 13? After Sunday’s 2-0 NYSPHSAA Class B title triumph over rival Garden City, Coach Sharon Sarsen’s Hornets won their 10th state title in the last 11 years, 13th overall, behind a pair of first-half goals from seniors Jenna McCrudden (set up by senior Lauren Salazar), and Erin Daly (set up by McCrudden), who had two assists in the state semis. Folks like to throw the term dynasty around like a rag doll these days, but I can’t think of any program in the once-great state of New York that commands the respect that Lakeland field hockey and Coach Sarsen does. It’s a next-level dynasty, plain and simple, and that was on full display at Alden High School in Western, NY.

You can argue with me all you want about New York still being a great state (and parts of it are) — despite its governor and shabby treatment of law enforcement — but there’s no debating the fact that Lakeland field hockey is unrivaled in this neck of the woods.