“We’re here to celebrate the official reopening of the White Plains station, which has undergone a top to bottom renovation,” said Janno Lieber, Acting Chair and CEO of the MTA. “Locals can now enjoy a state-of-the-art transportation hub that’s as sleek and modern as it is functional.”

When the pandemic hit, the station renewal project was underway. While some capital projects had to be paused, Lieber said the MTA took advantage of low ridership to move more quickly on the station’s improvements while following safety protocols.

“The renovation exemplifies our mission to build back better,” Lieber said. “As President Biden says, coming out of the pandemic, the way to win back and maintain mass transit ridership is to transform the customer experience.”

With upgraded customer amenities, riders will be more productive on the go and, Lieber said, further incentivized to return to mass transit.

“This renovated station is the perfect complement to the larger downtown revitalization of White Plains,” MTA Metro-North Railroad President Catherine Rinaldi said. “Whether our riders are Pace University students, workers coming back to the office or simply waiting for a local connection, they’re going to have a comfortable place to sit and get some work done while waiting for their train.”

With ridership back to 50 percent of its pre-COVID weekday ridership, Rinaldi said, this project is exactly what Metro-North needs to support the region’s recovery.

“The Westchester delegation has been relentless making sure that we are not forgotten as we are pushing for better transportation options and upgraded stations,” New York Senate Majority Leader Andrea Stewart-Cousins (D-35) said. “What’s happened here is emblematic of what we will continue to push for not only in this county but across the entire state.”

“Today we celebrate for the City of White Plains, the residents of Rockland County and the commuters,” Paulin said. “We’re hopeful that this renovation will mean that our riders come back because when they do, the entire system will be much more improved.”

“What happens today not only satisfies the commuters, but it satisfies the zeitgeist of people who don’t believe in government,” Latimer said. “This shows that the state of New York — along with the county of Westchester and the City of White Plains — can be a part of a major capital improvement.”

“This is the greatest, straightest answer to those people who believe that government doesn’t matter, that somehow we should deconstruct it, when in fact government accomplishes an important and a necessary purpose,” Latimer continued. “That’s what today means to me, and I think that’s exactly what it means to the people that use this facility.”

White Plains Mayor Tom Roach said completion of the station’s renewal is a testament to cooperation across city agencies, county government and the MTA.

“Transit is the lifeblood of our area,” Roach said, highlighting that a robust public transportation system, in tandem with affordable housing, helps White Plains residents significantly.

Assembly Member Chris Burdick (D-93) underscored that getting riders back to Metro-North is crucial not just for the financial health of New York but also for its ambitious goals under the Climate Leadership and Community Protection Act.

“These services, like this fantastic train station, are going to be the standard we aim for in every place because we know the future of not just White Plains and Westchester but the whole metropolitan region depends on public transit,” State Senator Shelley Mayer (D-37) said.

Quemuel Arroyo, Chief Accessibility Officer for the MTA, said that the revamped station — in addition to being beautiful and high-tech — sends a message that this is what true accessibility means.

Although the White Plains station was already fully ADA-accessible prior to its renovation, upgrades including a new elevator, fully accessible bathrooms and both auditory and visual train announcements further improved accessibility.

“For wheelchair users like myself, seniors with mobility disabilities, parents of children in strollers and so many others, it can be difficult to get around, but not here at White Plains,” Arroyo said. “This should serve as a model for all our stations throughout the MTA.” 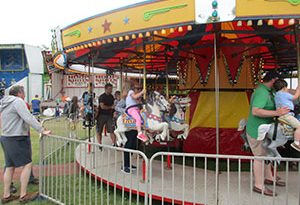