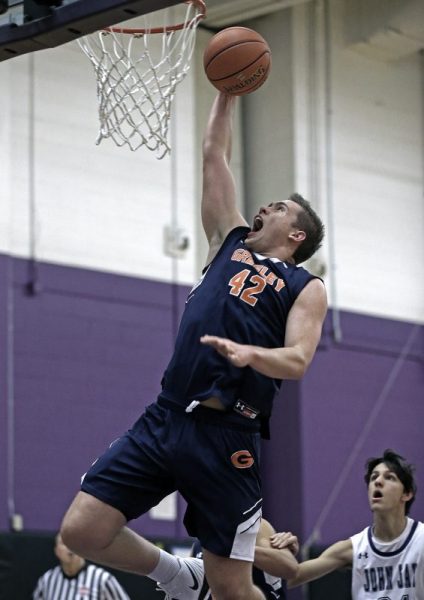 A season of big expectations for the Horace Greeley boys’ basketball team got off to a winning start on the road last Thursday evening.

With sophomore sensation Nick Townsend dominating start to finish, scoring 26 points and grabbing 20 rebounds, the Quakers easily defeated the host John Jay Indians 70-53. Greeley used an 11-0 burst in the first quarter to gain command, opened up a 20-point cushion late in the third, and then coasted to a satisfying victory in the opening game of the 2019-20 campaign.

“Nick, obviously, is Nick. He can do it all,” said the Quakers’ new head coach, Matt Simone, after watching his young tower of power patrol the paint with an increased level of skill developed since the end of last season. “You saw him bringing the ball up for us, he’s rebounding the ball for us. So he’s kind of our safety blanket.”

Townsend was supposed to be just one half of a Greeley dynamic duo, but with star forward Chris Melis currently recovering from recent shoulder surgery the Quakers’ immediate fortunes will fall squarely on his broad shoulders. Against the Indians, Townsend scored 16 first-half points, highlighted by three successive buckets in a 70-second span of the second quarter when the Quakers were stretching a five-point lead to double digits.

“Everyone knows how talented of a player he is,” said Simone, “but the thing that he developed this offseason, which is really helping us, is how he can handle the ball and he can hit 3s and shoot. So teams that are focusing on throwing bigs at him, he’s gonna be able to pull ‘em out and dribble by ‘em or shoot 3s. So he’s really becoming a very well-rounded player where last year he was more of a back-to-the-basket kind of guy.”

It took the Quakers three and a half minutes to score their first points of the new season. A 3-pointer by Sean Dunleavy finally got Greeley on the board and tied the score. It was followed a half minute later by a top-of-the-key jumper from Townsend that displayed his new-found range and gave the Quakers a lead they never relinquished.

Senior guard Christoph Sauerborn, who finished with 16 points and seven assists, provided a pair of drives through the lane for baskets during the Greeley 11-point run and the first quarter ended with the Quakers ahead 11-5. In the second quarter, Townsend erupted for 12 points, but John Jay somehow managed to stay within 26-18 as the teams left for the halftime break.

“Our whole locker room talk at halftime was the first four minutes of the third quarter was gonna decide the game,” said Simone. “And our kids responded to that.”

Indeed the second half began with a 14-6 Greeley spurt over the first four minutes, starting with a Townsend layup and ending with a Sauerborn 3-pointer from straightaway. With just over a minute left in the period, Seth Brail scored on an acrobatic scoop in the lane. He followed that with a left-corner trey that gave Greeley a 20-point advantage.

John Jay went to the fourth quarter trailing by 18 points and never got any closer than 16 the rest of the way. Matt Crowe came off the Greeley bench to supply three baskets in an impressive two-minute highlight reel. His first two, a layup and a 17-foot baseline jumper, were set up by nifty passes from, of course, Townsend, who began the final period on the bench but returned to demonstrate his playmaking skill and add two more inside buckets.

“We knew coming into this that John Jay’s always an athletic, tough, physical team,” said Simone. “They’re gonna pressure us and I think we did a good job with it. We really wanted to focus on our defense and our toughness playing together and we did a great job with that. The biggest thing I’m happy about is guys came in off the bench and were able to keep the level of play for us and we didn’t lose the lead or anything. So it was just a really good team effort.”

With the return of the high-scoring Melis still a long way off, Simone knows his Quakers will need a lot more dazzling performances from Townsend in the weeks ahead, and increased production from the rest of the squad.

“Obviously that’s a huge blow,” he said of the absence of Melis. “But we still have the same expectations. I think we’ve still got a great team. We’ve still got guys like Christoph and Will Lafortezza that we’re looking at to kind of step up. So far in the offseason and today they’re doing a good job of carrying the load. Everybody’s got to step up and chip in a little bit extra. We’ve got a tough schedule, but I think we can compete with every team we play.”