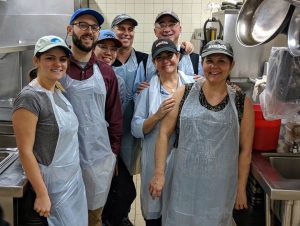 Pictured, from left, are Salli Figler’s daughter Jamie; son Matt and daughter-in-law Jess; husband Bruce; brother-in-law Huj and sister Jodi; and Figler helping out at a dining hall in the Bronx that offers free meals. All will be joining Figler for the Support-A-Walk on Sunday.

“I knew Mary was going to Support Connection and that her children and husband were getting the emotional support they needed,” Figler recalled. “I could see what a great organization it was.”

After the dreaded disease took Mary’s life 10 years ago, Figler joined the organization’s next Support-A-Walk for Breast & Ovarian Cancer.

“I had a large team with me that first year,” she said. “I was joined by many friends who knew Mary and wanted to celebrate her life.”

Figler continued to walk with Support Connection for a few years, but became involved in other groups helping people in need. This year, the 10th anniversary of Mary’s death, Figler has returned to the walk to recognize her late friend and Support Connection in a different way. Three weeks ago she posted a fundraiser page, https://www.firstgiving.com/fundraiser/salli-figler/walk2019, with a goal to raise $1,000 for Support Connection.

“When I decided to post my fundraising page, I had a lot of support and positive recognition from my family and friends,” Figler said. “They know this is important to me and they feel it’s a great thing to do. There is a spider-and-web kind of effect that we can all have. I like that.”

This year is the 25th annual Support-A-Walk, which will be held this Sunday, Oct. 6 at FDR State Park in Yorktown Heights. It is Support Connection’s most important annual fundraiser, with 88 cents of every dollar raised directly funding its free breast and ovarian cancer support services.

Support Connection was then established the next summer, in July 1996, and doesn’t receive funds from any national cancer organization.

“During that walk it hits you that this is real,” Figler said. “All the people are walking because they either love someone who has cancer or someone who has died of cancer or who is a survivor. Some have sad stories, some have happy stories, but these are real people who are living with cancer in some way. It brings a strong reality of what the illness is.”

Figler’s memories of Mary date back to when their young children became friends.

“They were a new family moving in from Brooklyn with a son and daughter the same age as my children,” Figler recalled. “We quickly became friends and she was a wonderful, positive and caring person who I adored.”

She was aware her friend had breast cancer but never knew the severity. When the cancer metastasized, their daughters were 13 and their sons were 18.

After Mary’s death, her husband told Figler that his daughter never knew her mother as a healthy person.

“She only knew her mother as being ill,” Figler said. “Mary was always being tired, always going to the doctor or in the hospital overnight. Having cancer affects the whole family. Her kids were young and Support Connection offered solid support for Mary’s husband and her children.”

“I am just hearing so much about breast cancer,” Figler said. “I have another friend who is fighting for her life, and even though there are new treatments, it seems women are still dying. I strongly feel that I have to fight in another way – for Mary and for all the women battling breast cancer.”