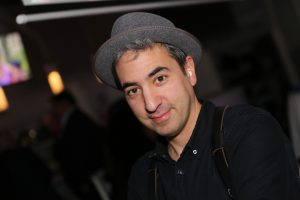 Pleasantville photographer Chad Kraus recently photographed about 30 students from this year’s high school graduating class, trying to capture their disappointment of the end of their high school careers.

As Chad Kraus spent the early weeks of the COVID-19 crisis sheltering in place, he searched for a meaningful way to use his talents to help others in and around his hometown of Pleasantville.

A short time later, Kraus read an article about how a Washington D.C. area photographer had snapped pictures of high school seniors who lost all of the special moments that this time of year is supposed to hold.

With virtually all of his own photography jobs canceled as the stay-at-home order has now lasted through two months, Kraus thought he could provide a similar service to some of the seniors at Pleasantville High School free of charge.

He reached out to parents and families to spread the word, and on May 12 and 13 spent his time taking portraits of students at the Pleasantville High School circle, using the school building as the backdrop. It wasn’t meant to replace prom or graduation photos – he didn’t want them wearing caps and gowns, suits or dresses or posing as though it was a yearbook picture – but rather to capture a bit of what each student was feeling and missing.

“For some, a smile came naturally, but it was just meant to capture them and their current emotions, and whether that means a smile or a little bit of a close-mouthed smirk, whatever it is, it’s really meant to be a little melancholy,” Kraus said.

Each student who signed up was asked to wear their everyday clothes and bring an item that they identify with or from a favorite activity. Students brought a musical instrument, a piece of sports equipment, artwork or were wearing the colors of the college they are planning to attend.

Kraus said over the two days he photographed about 30 students. Some parents reached out to Kraus to tell him how much they appreciated his efforts. But there were other students who would have liked to participate but the pain of losing the final three months of high school and all those special experiences hit too close to home.

“There’s kids, there’s student who weren’t prepared emotionally to do it because they’re still kind of sad from not being able to do all these things they were going to do,” Kraus said. “There’s prom, there’s graduation and it would just be too much for them. So I’m sure some didn’t do it because of that and yet I had others who said how great they thought it was.”

He has since been contacted by the mother of a senior at neighboring Briarcliff High School, and along with other senior class parents, want Kraus to take similar portraits – only they’ll pay him for his services.

Kraus said that despite the difficulty of the time, with many families struggling economically, he has been heartened that so many ordinary citizens have reached out to help others. For the 30 students last week, he likely gave them a memory that will be important to reflect on decades into the future.

“My hope is that 10, 20 years from now with some distance and some time can help and some perspective, and they could look back and share what this time was like with their kids and their grandkids and future generations,” Kraus said.