PUTNAM VALLEY faced a daunting path toward a possible Section 1 Class B Girls’ Basketball Championship. The Tigers were seeded fifth and if the seeds held true, they would have to beat No.4 Bronxville, top-seeded Hastings and then second-seeded Irvington and legendary Coach Gina Maher. The bumps along the road were a combination of craters and sinkholes the Tigers would need to navigate.

After eliminating Bronxville in the quarterfinal round, state-ranked (No.15) Putnam Valley completed its run to the title game with a 51-45 semifinal victory over No.7 Hastings. The Tigers added the exclamation point with a 52-46 triumph over No.13 Irvington to win the Section Class B title at Yorktown High School Saturday.

Putnam Valley, now 17-7 this season, will play Section 9 champion Red Hook, Wednesday, 4:30 p.m., in a regional semifinal at Yorktown. The winner will face the Section 8-Section 11 victor in a regional final (TBA).

This is Putnam Valley’s third consecutive championship. The Tigers won the Class B title in 2020, but they, along with all sectional champions that winter, were denied a chance at a state title because Covid canceled the state championships. Last year, Putnam Valley was the Northern Westchester/Putnam Small-School Champion, beating Class A Walter Panas in the final.

“This entire season we had so many goals, but the main goal was to win the sectional title,” senior G Amanda Orlando said. “Honestly, for the seniors, Natalie Mazza and LeAnn Keeler, and especially for me, growing up and going through the Putnam Valley girls’ basketball program, I wanted to win for my last year and wanted to show we still have the talent and energy to win”

The season began with a myriad of issues, including a new coach after the district decided to pass on former Coach Kristi Dini.

“It was hard to transition to a different coach, but that didn’t stop us,” Orlando said. “Coach Don (Hamlin) has been the biggest help the whole season and he got us to do what we wanted to do.”

Even though Putnam Valley owned a victory over Irvington during the regular season, it did not come into the final overconfident. It’s difficult enough beating a Gina Maher-coached-team once during the season, let alone twice. However, fueled by a tough defense and DeChent’s instant offense (18 points in the first half), Putnam Valley led at halftime and never relinquished it.

“We didn’t go cocky, but we were humble and mentally ready for Irvington because we knew it was hard to beat them and their fantastic coach,” Orlando said. “Irvington and Hastings are similar, so we started out in the same defense as we did against Hastings. Then we switched up our defense after multiple possessions to confuse Irvington. We started in a 2-3 then switched to man.

“Offensively, we all know each other and we know our strengths, so we did everything in our power to make sure we were getting the job done offensively. We wanted this so bad and I think our energy was the best it’s ever been this season.”

Hamlin inherited a well-trained team that had all the pieces in place under former Coach Kristi Dini, but there were inherent issues, on and off the court, which Hamlin needed to manage while getting to know their personalities.

“My job was to just get them on the same page,” Coach Hamlin said. “They went through what they went through before the start of the season. High school kids shouldn’t have to worry about that stuff. They should know their coach is there and it’s all good at the start of the season, but I would say the last three or four weeks they finally bonded and started doing things together, and honestly, winning the gold ball was great, but seeing them bond and do things together was heartwarming.

“Eva was Eva,” Coach Hamlin added. “She was on fire in that first half and I kept insisting we feed her and get her the ball. What are we waiting for? Swing the ball back to her, she’s gonna knock it down. When you’ve got a kid hot like that, as good as she is, you have to get her the ball. Nai Torres came up with some huge shots down the stretch and played fearless tonight. She’s come a long way.”

DeChent, the URI-bound sniper, put the team on her back in the first half.

“I’ve been shooting a lot the past couple of days to get ready,” DeChent said, “so I knew that this was going to be our biggest game and challenge, tougher than any other game we had this season. We know how bad they want to beat us, so we needed to come out with as much energy as we could and do the best we could. Nai (Torres) brought up the energy when we were down, too. The feeling is amazing.”

Torres was sensational in the second half, coming of age before the eyes of Section. The hybrid guard scored 13 points, dished three dimes and grabbed four boards to secure an All-Tourney nod along with Orlando (5 points, 7 rebounds), Natalie Mazza (5 points, 6 rebounds) and Brianna Foody (5 points).

Hastings had defeated Putnam Valley during the regular season, but the Tigers came into the semifinal game focused, defensively.

“We switched our defense and we prepared for every possible situation both mentally and physically,” said Orlando, who will attend Manhattanville College in September and continue playing basketball. “We wanted to shut down their top offensive player. We executed our defense so that they couldn’t get the ball inside to her by playing a box-and-one. Nai (Torres) and Eva (DeChent) switched off on her. When she got the ball, we applied pressure by doubling her.”

Lichtenberger Pitches the Foxes to a Win Over Greeley 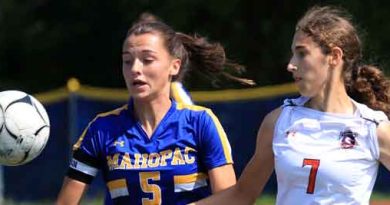