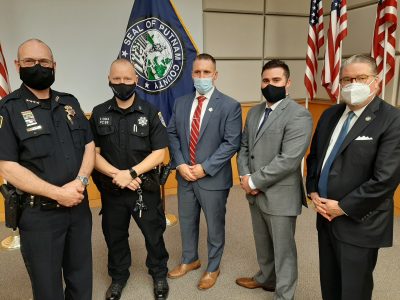 State Senator Peter Harckham handed out the medals to Benjamin Levine and Kevin Osika at the Putnam County Bureau of Emergency Services headquarters in Carmel during a special ceremony.

“The call of duty for our first responders is often varied, intense and profound. Proper action requires every facet of their training,” Harckham said. “In two instances, Putnam deputies showed exemplary and poised judgment in helping two distraught residents, for which we are entirely grateful.”

On May 27, 2019, Deputy Osika responded to a scene with a man who was standing on the side of the Veterans Memorial Bridge in Brewster over Interstate 84. Without hesitation and risking his own safety, Osika approached the man, who appeared ready to jump, and pulled him off the edge of the bridge. The man was taken safely to the Putnam Hospital for evaluation.

Meanwhile, on July 14, 2019, Deputy Levine was the first officer to respond on the scene at the Bear Mountain Bridge when he similarly found a man about to jump off the bridge. While engaging the man in a dialogue for more than 25 minutes, Levine provided him reassurance and directed his focus from the bridge. After other officers and an ambulance arrived, Levine was able to take the man’s hand and escort him off the edge of the bridge and towards the ambulance.

The Liberty Medal is the highest honor bestowed upon an individual by the New York State Senate. Along with their medals, Harckham presented the deputies with Senate resolutions thanking them for their heroism.

“This is the finest group of officers I have ever worked with,” said Putnam County Sheriff Robert L. Langley, Jr. “The pride I have in them is unmatched. They are true representatives of professional law enforcement and fulfill their duties with the utmost integrity and compassion.”

Harckham also presented a Senate Memorial Resolution to Sheriff Langley in honor of his father, Robert Langley, Sr., who served in the U. S. Air National Guard of Texas and U. S. Coast Guard. In 1962, Langley, Sr. moved with his family to Carmel and worked for the New York State Power Authority as a sergeant with the security force at the Indian Point Energy Center in Buchanan.