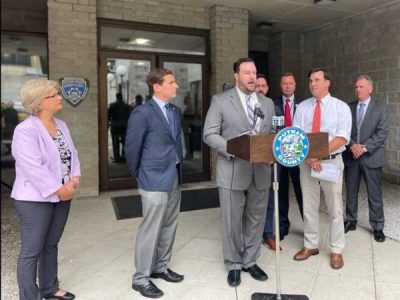 Putnam County officials are seeking answers from Albany on how to implement new laws implemented by the State Legislature last month that will go into effect September 1 regarding gun permits and restrictions on the carrying of concealed weapons.

On July 1, Governor Kathy Hochul signed a package of measures crafted in response to a June 24 federal Supreme Court ruling that ended a 100-year legal precedent requiring individuals to demonstrate “proper cause” to obtain a license to carry a concealed firearm. The previous law gave discretion to states and its licensing officers in determining what constitutes “proper cause,” which the court cited as unconstitutional.

“I will continue to do everything in my power to combat the gun violence epidemic,” Hochul stated when signing the legislation.”

However, during a press conference last week in Carmel, state Assemblymen Kevin Byrne and Mike Lawler, both Republicans, Putnam County Clerk Michael Bartolotti, Putnam County Sheriff Kevin McConville and Yorktown Supervisor Matt Slater, who is running to succeed Byrne, criticized Hochul for failing to follow-up with information on how to follow the new regulations.

“Governor Hochul did this for purely political reasons leading up to her primary. The Governor rammed through this bill which I suspect will be deemed unconstitutional,” Lawler remarked. “We are seeing a rapid rise in crime and people are scared. They have a right to defend themselves and their families. We should be working together on these issues, but we should be going after the criminals using illegal guns to commit crimes. We need to approach this in a common sense and fair way. If the Governor wants to call us back for another extraordinary session she should start with repealing cashless bail and all of the pro-criminal policies her party has put into effect.”

“These laws are making life more difficult for responsible law-abiding citizens and also for our county governments,” said Byrne, who is running unopposed to replace term limited Putnam County Executive MaryEllen Odell. “We have questions that have not been answered. There are costs associated with these new requirements and our partners in government deserve answers.”
The legislative package includes: Expanding on eligibility requirements in the concealed carry permitting process, including completed firearm training courses for applicants; allowing the state to regulate and standardize training for license applicants; restricting the carrying of concealed weapons in sensitive locations and establishing that private property owners must expressly allow a person to possess a firearm, rifle, or shotgun on their property; establishing state oversight over background checks for firearms and regular checks on license holders for criminal convictions; creating a statewide license and ammunition database; and strengthening and clarifying the law relating to the sale of body armor to include hard body armor, such as the type worn by the suspect in the Buffalo shooting and the safe storage of firearms.

“States are the last line of defense, which is why we are stepping up to protect New York from being easily flooded with concealed weapons and keeping firearms out of the wrong hands,” said State Senate Majority Leader Andrea Stewart-Cousins. “These measures, in addition to the previous anti-gun violence legislation we passed, are vital in a time when there are more guns than people in America.”

Bartolotti, who serves as the President of the New York State Association of County Clerks, questioned the feasibility of implementation.

“The core issue here is there is zero communication. These requirements are supposed to be passed down by September 1st and we have not heard a thing,” Bartolotti said. “This is not about whether we agree with the principles of these laws or not but how to make it work properly so we don’t turn law abiding citizens into criminals overnight.”
“It is important that we work together to get answers to questions that have been asked by all of us,” McConville said. “Not one of us has an answer and the deadline for implementation is approaching rapidly. We need answers, guidance and funding to carry this out. I urge all of our residents to call Albany to demand answers.”
An appeals board was also created for those applicants whose license or renewal is denied or revoked. That takes effect on April 1, 2023.

Families Join Together for Drug Crisis Awareness Efforts in Mahopac

Mahoney Looking at Run for School Board