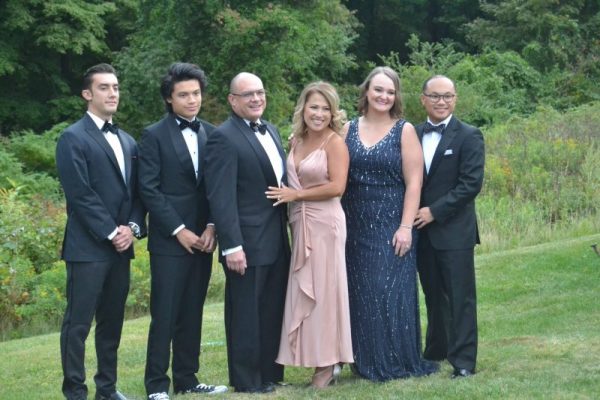 Exceptional medical skills coupled with a deep sense of compassion make for a first-rate doctor. A doctor of that caliber is Dr. Carl Calica who was honored last Saturday at the Putnam Hospital Center annual, black-tie Moonlight Ball in Carmel.

Calica is PHC’s Chief of Surgery and has been at the hospital since 2003. Every year for the last ten years, Calica has spent two weeks in the Philippines offering free surgical procedures and operations to those unable to afford professional medical help. He served as president of the Society of Philippines Surgeons in America (SPSA) in 2015; the respected organization was founded in 1972.

“I work with doctors who come from all over the world, doctors who are plastic surgeons, gynecologists, ophthalmologists and dentists,” Calica said. “We perform a variety of surgeries, including cleft palate reconstruction. Those who are indigent and who have no chance of getting medical help, come to us at their local or government hospital where we can cure them. It gives them hope. Helping them has always been quite rewarding.”

One of Calica’s ties to the Philippines was studying at his father’s medical school, the Far Eastern University Institute of Medicine in Manila. Calica went on to complete his internship at Maimonides Medical Center in Brooklyn, followed by a General Surgery residency at Harlem Hospital Center.

Calica was also honored for his deft surgical skill in robotic surgery. He uses the da Vinci Si Robotics System whose state-of-the-art technology allows surgeons to perform complex procedures through dime-sized incisions. Surgeons use small controllers attached to their thumb and middle finger with a stereoscopic view from monitors. There is less cutting or blood loss.

“I was introduced to da Vinci in 2012 when it was a relatively new surgical technique,” Calica recalled. “It has several advantages, but most importantly, the recovery involves less pain, which lessens the need for narcotic pain killers.”

To date, Calica said he has performed about 600 robotic surgeries.

Calico and his wife, Rosamon, reside in Briarcliff Manor. They were joined at the Moonlight Ball by their sons Maxwell, Marcus and Miguel Lumaque and Lumaque’s wife, Chelsea Lumaque.

Calica came to Putnam Hospital Center in 2003 when he joined the practice of Drs. Lyda Rojas and Adam Semegran, forming Putnam Surgical Associates. In 2008 he and his partners became shareholders in CareMount Medical, which is the largest independent multi-specialty medical group in New York State. Calica has been the subject of numerous awards and recognitions, including Hudson Valley Magazine Top Physician, Castle Connolly Top Doctor, and US news and World Report Top Physician.

Under the expansive white tent and the 29-candlelit tables at the hospital’s Moonlight Ball, among the approximately 250 people attending were Calica’s professional colleagues and hospital board and foundation members.

“It is well deserved! You join a distinguished group of people who have received this honor in the past – several of whom are with us tonight.”

Klein also thanked many medical groups, businesses and organization who helped contributed to the event. A three-minute video highlighted Calica’s significant contributions to the medical community, his patients both at PHC and in the Philippines.

Dr. Adam Semegran, co-chair for the Moonlight Ball said “We are truly grateful to Dr. Calica for his profound dedication to the hospital and our community.”