Skip to content
The Northern Westchester Examiner
August 17, 2018 Rick Pezzullo
We are part of The Trust Project 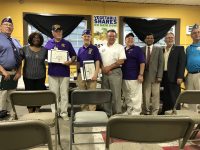 Since Yorktown is a Purple Heart Town, Supervisor Ilan Gilbert read a proclamation about Purple Heart Day, which recognized and thanked all veterans who have served the country and community.

“Whereas today, the Purple Heart is awarded to honor the combat wounded, wounded veterans of this country and those who make the sacrifice and never return home,” Gilbert read. “Whereas our veterans have earned profound and eternal gratitude from all people of our town for the willingness to risk their lives and limbs for the sake of this nation, its people and the sake of its cherished freedoms.”

Following the reading, Gilbert presented Commander Dale Novak with the accepted proclamation from the Town Board on behalf of their chapter.

“Everybody who has received a Purple Heart has different levels of suffering. For me, the six days that I spent in the hospital were a small thing compared to some people,” Novak said during his acceptance. “They got the same medal I did, but they paid a much more severe price than me, so I thank you for this honor.”

Novak also addressed the work that his chapter does with the Hudson Valley Healthcare System PTSD inpatient unit in Montrose. They help fundraise for them to make their stay at the PTSD unit more pleasant, but also let them know the community is behind them, according to Novak.

In addition, Gilbert presented the individual certificates of appreciation to nine other veterans of Chapter 21, including Novak, “in recognition of the service and sacrifices in the defense of our country and its citizens on behalf of Yorktown and its residents.”

Sr. Vice Commander Eugene Lang and Commander Neil Gross accepted awards on behalf of those not in attendance.

After receiving his certificate, Lang read a poem by Clive Sanders called, “Unless You’ve Been a Soldier,” which details what soldiers endure, but how they are proud to have served their country.

Gross also recommended that the Town Board work to implement a program in the Yorktown and Lakeland school districts that would allow for veterans to educate students about their experiences in World War II, Korean and Vietnam Wars first-hand.

“Unfortunately, we have been cut out of the Ossining High School Living History Veteran’s Project. I only attended a couple of their programs, but the knowledge and learning that went on was invaluable to the students,” Gross said.

According to Gross, some students had no idea whatsoever about the organizations that make up the United States military or what a Purple Heart was.

“There are two sources of information – first is primary source, which is us, and the secondary source is your textbooks, writings and other documentaries,” he said. “But there’s nothing like hearing about our experiences as a veteran directly from a veteran.”