Skip to content
The Northern Westchester Examiner
May 30, 2020May 31, 2020 Rick Pezzullo Peekskill, westchester, White Plains
We are part of The Trust Project

“No Justice, No Peace!” was the outcry during a peaceful but forceful rally in downtown Peekskill Saturday afternoon.

At least 200 residents of all ages turned out to denounce the killing of George Floyd, a 46-year-old African-American man, in Minneapolis last Monday by a white police officer.

A similar protest took place in White Plains Friday, the same day Derek Chauvin was charged with third-degree murder and manslaughter after being caught on video May 25 kneeling for more than eight minutes on Floyd’s neck. Floyd was a minister who was being arrested for allegedly using a counterfeit $20 bill in a deli.

“This isn’t a skin thing, it’s a sin thing,” Pastor Rob Lindenberg of The Peak Community Church and a volunteer chaplain with the Peekskill Police Department said in a passionate plea to those who gathered in the plaza outside The Field Library.

“The only way we can beat this system is to change it,” he continued. “We the people have the power. I still believe America is great. Love conquers hate.”

As Peekskill police officers stood silently in the backdrop, several anti-police remarks were made by some speakers, while others expressed their displeasure through posters that read, “No Racist Police” and “Who do we call when the murderer wears a badge?”

“The life-and-death decisions that a police officer makes are often done within a fraction of a second, which is what makes this so disturbing,” Halmy stated. “Time stands still during emergencies. Seconds seem like minutes; minutes can feel like hours. For George Floyd, eight minutes was a lifetime. There are no excuses, the time to alter the course of this conduct ticked by in what seemed like an excruciatingly long eight minutes. Action and inaction are equally to blame.”

Kwame Madden, one of the organizers of what was billed as a “rally and speak out against white supremacy,” maintained “racism and capitalism go together.”

“This is a crisis,” he said. “We have to fight back. We need allies in this. We can’t do it alone. This is going to be a long struggle.”

The rallies in Peekskill and White Plains were the scores of protests across the state and the country since last week.

On Sunday, Gov. Andrew Cuomo said he understands the outrage in society in general and the African-American community in particular, which has been made worse by the pandemic and accompanied by massive unemployment and loss of businesses.

“People are outraged and I understand that,” Cuomo said. “I’m outraged. It’s not just George Floyd’s killing. That’s enough to outrage a nation. It’s George Floyd, it’s Ahmaud Arbery, it’s Breonna Taylor, all within the last three months. It’s 30 years of Rodney King and Amadou Diallo and Sean Bell and Abner Louima and the same case in states all across this nation, where only the name changes but the color stays the same.”

He said state Attorney General Leticia James will be investigating protests that turned violent in New York City Saturday night and that the mayor of Rochester and the Monroe county executive asked for about 200 state police officers for Sunday night.

The governor then denounced the violence that has erupted across the country and called for several policy changes. Those include bringing police abuse cases to an independent prosecutor, having one standard for excessive force across the United States, releasing the disciplinary records of police officers who are accused and being investigated for abuse and demand that every public school provide the same level of funding for each child’s education.

“George Floyd must not have died in vain,” Cuomo said. “Mr. Floyd’s killing, must be a moment which this nation actually learned and grew and progressed to make this place a better place, and we can do it if we are smart together.”

Smith took blame on behalf of representatives and civil servants for letting constituents down. 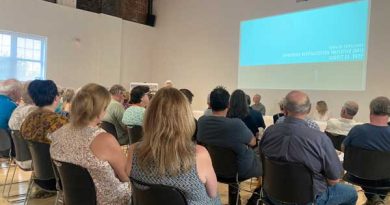