Skip to content
The Northern Westchester Examiner
February 18, 2019 Rick Pezzullo
We are part of The Trust Project

Waving signs that read “Fake National Emergency,” “Make America Sane Again,” “The Real Crisis is in the White House,” and “America is Not Reality TV,” among others, the peaceful crowd denounced Trump declaring a national emergency Friday in order to use more than one billion dollars to extend a wall on the southern border.

The demonstration was part of a nationwide effort to oppose Trump and what some feel are his dangerous and racist policies.

“Why do we need this wall? Because Trump is racist,” said Courtney Williams, a resident of Peekskill and co-founder of the Safe Energy Rights Group “We have many real emergencies in the United States right now. We are wasting our time on fake emergencies like building a wall. This is all one fight.”

Among those at the protest were State Senator Peter Harckham (D) and Peekskill Councilwoman Vanessa Agudelo, both of whom criticized Trump for his actions.

“His emergency declaration is an abuse of power. It’s repugnant because it’s a power grab in an un-American way,” Harckham said. “This is a humanitarian crisis brought up by the President of the United States. We stand with the immigrant community. We all came from somewhere. 9/11 was a national emergency. Superstorm Sandy was a national emergency. He himself said he didn’t have to do this.”

“We need to be able to have a conversation about immigration,” Agudelo said. “We all come from families of immigrants. Every day we are coming closer to becoming a fascist nation. We cannot allow this to happen. It’s not going to end with Trump.”

Speakers were interrupted at times with chants of “No way, no wall,” “Dump Trump,” and “The people united will never be defeated.”

“The most important thing we face is the fact we have a government that is allowing the Constitution to be torn apart,” Kesten said. “This is about the destruction of the American Constitution.”

A statement from Schumer was read at the demonstration, in which he stated, “This is plainly a power grab by a disappointed president who has gone outside the boundaries of the law. The president is not above the law. The Congress cannot let the president shred the Constitution.”

However, Schumer wasn’t spared criticism at the rally, which some, such as Williams, charging the minority leader wasn’t doing enough to protect the people. 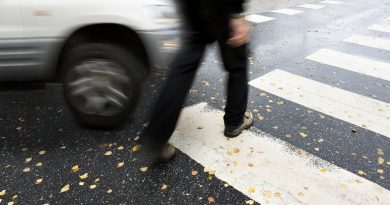 Walter Panas Grad to Perform in Manhattan on February 15

Yorktown Marathoners in Middle of ‘Chaos’ in Boston