Skip to content
The Northern Westchester Examiner
April 24, 2017 Rick Pezzullo
We are part of The Trust Project 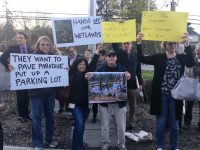 Hundreds of Yorktown residents gathered at last Tuesday night’s Town Board meeting to criticize the board for its proposed Freshwater Wetlands Protection Ordinance, a law that would significantly increase the minimum extent for wetlands throughout the town.

Several members of the community spoke out urging the board to reject the new law that would increase the minimum size for wetlands from 1,000 square feet to 4,356 square feet. Residents strongly believe the proposed law is weaker than the current law, with many asserting that it protects fewer wetlands and will be detrimental to homes that rely on wetlands to prevent flooding, protect the habitat and consumer protection.

Prior to the meeting, residents congregated outside Town Hall carrying signs and chanting slogans such as “Save our wetlands,” and “Water is life.”

“The revisiting of our infrastructure has been a project this town board has been involved with for a couple of years, a lot of the regulations that are on the books have been on the books for decades and have not been touched,” Supervisor Michael Grace said during the April 18 meeting. “We are revisiting them to see how effective they are and how effective they can be and then we tweak them to be more effective.”

Despite the board’s intent to revise the law, residents believe the changes are unnecessary.

“They’re weakening the wetlands law and we want the law to be kept as stringent as it is now and we want some respect, not only for the land but for the citizens in the community,” said Grace Camporino, a 40-year resident. “It’s always been a pride of ours that the environment has been well-maintained and that has changed with this board.”

Paul Moskowitz, President of The Huntersville Association and 35-year resident, said the board’s effort to weaken the law on wetlands is foolish and they need to listen to their constituents and maintain the protections of the wetlands.

“For a homeowner, wetlands protect my property from flooding, they protect the roads of Yorktown from flooding and if we compromise the wetlands we are compromising our own quality of life,” Moskowitz said. “We should be doing more to protect our wetlands, not less.”

Grace, who said the original wetlands ordinance hasn’t been updated in almost 30 years, explained how the board wants to protect the functions of a wetland, including the environment, the local economy and the legacy of the town.

“All those aspects are very important and we want to preserve and protect the functions of a wetland,” he added.

The revision of this law follows the board’s repeal of the town’s existing affordable housing law and the adoption of the revised tree ordinance last year.

“We have a wetland behind our house and I’m thrilled about it,” said Jenny Sunshine, a 13-year resident. “I think all wetlands are important and if you pave over wetlands it will fundamentally change our ecosystem forever. Leave the wetlands alone, leave the environment alone and do other things.”

Following the four-hour hearing, the board unanimously agreed to reject the fifth draft of the proposed law.

“Our goal is always to try to review what’s on the books and try to make things better for all of us,” Grace said. “The board would like to work with everyone to see if we can tweak our law to make it a better functioning law for everybody.”