Treatment for those suffering from substance abuse has evolved over the years, where a key goal is to provide help before the person becomes ensnared in the criminal justice system – or experience an even worse outcome.

A new program was launched early last year in the Hudson Valley and has expanded to five counties, having recently started in Westchester. There are now seven communities in Westchester whose police departments have committed to the effort.

Hope Not Handcuffs is a pre-arrest diversion program where the person who needs help voluntarily reports to a participating police department. Rather than interact with an officer, they will be met by an “angel,” a local volunteer who lives in the community and has been trained to assist people find treatment.

Pleasantville Police Chief Erik Grutzner said even if a person is carrying illegal substances, they can surrender them without any legal consequences if they sign up for the program. However, they will not receive that same benefit if they are arrested first.

“We really think it’s a great fit,” said Pleasantville Police Chief Erik Grutzner, whose department is one of the seven participating law enforcement agencies. Handcuffs. “We’re realizing that especially now, with the (governor’s) executive order that’s out there, and the idea that making sure the right people are doing the right jobs for us to work as a conduit with a not-for-profit that specializes in getting people into treatment is better than us trying to get people into treatment.”

The program, which debuted in Orange County in early 2019, is run by the Tri-County Community Partnership, which is responsible for bringing together the volunteers, community organizations and law enforcement to help find treatment options for those in need, said Annette Kahrs, program. There are close to 35 police departments that are now taking part, she said.

On Sept. 1, the Yorktown Police Department went live with Hopes Not Handcuffs, the first Westchester department to do so.

One of the challenges of expansion is making sure that there are enough angels available so if someone arrives at a department headquarters seeking help at any time of day, there will be a volunteer to meet them within 20 to 30 minutes, Kahrs said.

“They don’t have to have any previous experience,” she said of the angels. “They just have to be compassionate, kind and willing to help somebody in need.”

Training for the angels takes about three hours, according to Kahrs, but they have not had in-person sessions since February before the pandemic hit. Tri-County Community Partnership looks to have a larger group than is necessary to be trained. For example, in Orange County there are about 330 angels or 17 departments, but she estimated that about 75 of the volunteers are regulars, she said.

Yorktown is currently drawing on angels from Putnam County until the department can adequately fill its ranks of angels, Kahrs said.

Grutzner said most of the Westchester departments are in close proximity to one another so the agencies can share the volunteers. Neither an angel nor someone seeking help has to live in the community where they report.

There is also training for police but there is relatively little interaction between officers and those seeking help, he said.

“What we are really looking for are these community angels who can come in,” Grutzner said. “What it is is basically being available to come in and give somebody a little bit of comfort and guidance and get them into the Hope Not Handcuffs program so that they can be placed in an appropriate facility. We need to have that infrastructure built in place before we can really be prepared and have people come in and do that.”

He expects that the program will go live in Pleasantville before the end of the year.

For more information on Hope Not Handcuffs or to inquire about becoming an angel, call 833-428-4673 or visit www.tccpartnership.org. 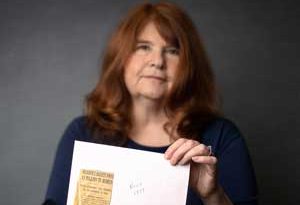 North Castle to Hold Hearing on Appointed Receiver of Taxes