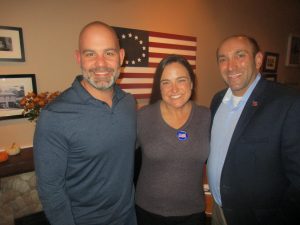 From left, Jeremy Saland, Ivy Pool and Jason Lichtenthal were all smiles Tuesday night after they easily won election.

The New Castle Democrats guaranteed themselves a majority on the Town Board next year by easily sweeping their three Republican challengers in Tuesday night’s town election.

Councilwoman Ivy Pool will make the transition to the supervisor’s office in January after defeating Jim Smith, 3,111-1,525, according to unofficial totals from the Board of Elections. Incumbent Councilman Jeremy Saland and Millwood Fire Commissioner Jason Lichtenthal collected 2,925 and 2,905 votes, respectively, finishing well in front of opponents Lauren Levin (1,787) and Sean Maraynes (1,519), who joined Smith on the Team New Castle ticket.

“It was really a team effort and we had an incredible team behind us,” Pool said moments after she and her running mates declared victory. “We are a slate of people who are friends in real life and who worked together to create a platform that we all stand behind, and then we had a team of focused volunteers that worked with us and for us.”

She said that the victory also was a testament to their experience of having served the town.

Pool, who two years ago was elected in her first run for office in a close Town Board race, said she will start preparing for the jump from council seat to supervisor this week, a step that she called “pretty significant.” She planned to work with outgoing Supervisor Robert Greenstein in hopes of making a smooth transition.

Smith said the results closely mirrored the percentage of New Castle voters’ party registration, which is something they were unable to overcome in a hyper-partisan political environment. However, he was happy with the campaign that he, Levin and Maraynes ran and enjoyed knocking on doors and speaking to residents about the issues facing the town.

“I’m really pleased with it,” Smith said. “We worked really hard at it and stayed above the fray on things.”

While not ruling out another run sometime in the future, Smith said he plans to continue attending Town Board meetings and staying involved with the town’s issues.

Meanwhile, Saland, elected to a second term, complimented the volunteers who helped the ticket to a resounding victory.

Lichtenthal, who has attended meetings throughout the year, said he will get up to speed quickly and will be ready for January when he is sworn in.

“I understand the process that goes on, which is pretty helpful,” he said. “We’re just a great group of people that are going to be on this Town Board.”

Maraynes said that with Greenstein having won three consecutive terms as supervisor and Councilman Lisa Katz having won twice on the Republican-backed Team New Castle, the Democrats were motivated and prepared to get out their vote and run a hard race.

“At the end of the day, the issue was voter registration,” Maraynes said. “We talked to everyone for 10 months about what we’re about and local issues and keep the party politics away. I wish the other side did the same, but they didn’t.”

During the campaign, questions were raised about Smith’s series of contributions in 2016 to Donald Trump’s presidential campaign and inauguration. Their opponents took the opportunity to bring that out in public and dismissed Team New Castle’s claims to nonpartisanship.

While Greenstein and Katz had won while endorsed by the Republican Committee, they are registered Democrats.

However, Tuesday night’s results may not have been a complete loss for Team New Castle. By winning the supervisor’s race, Pool will vacate her council seat at the end of the year. The three Democrats and Katz will appoint an interim board member until a special election is held next November to serve the remainder of Pool’s unexpired term.

Saland said he and his ticket had expressed support during the campaign to appoint the third-place finisher in the council race to the vacant seat, a commitment he said he is prepared to honor.