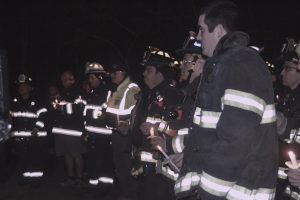 To date, the case is unsolved.

“Tom Dorr is not forgotten and he is more than just a name on a cold case,” Westchester County Police Capt. Mark Busche told the crowd at the vigil. “He deserves respect and dignity. That’s why we are taking a hard look at any leads.”

People surrounded a 40-foot maple tree planted as a sapling after Dorr’s murder in January 1996. Dorr, who was to report to the Washington Avenue firehouse on standby along with other volunteer firefighters ahead of a blizzard, never made it to the firehouse. Fellow firefighters troubled by his absence searched the park and found his beaten and stabbed body under two feet of snow the next day.

At the vigil, a bagpiper softly played “Amazing Grace” and prayers and remembrances were shared. John Thys recalled his first year as a volunteer firefighter more than 20 years ago and how vigils for Dorr have been an annual event.

“If Tom’s murderer is found, these vigils might not stop,” Thys said. “The vigil could have a different meaning and we would hope people would still come.”

John Brooks, who plans the vigil every year, said Dorr, who worked for the White Plains Water Department, was a hard worker and a family man who loved his kids.

“He was a big guy, around 6-foot-7, and everyone called him the gentle giant,” Brooks said. “We are here hoping for some kind of resolution. We are not going away.”

Dorr had served in the Pleasantville Volunteer Fire Department since 1979.

“The police had two strong suspects, his stepson and his wife,” Cultice said. “I don’t know how the police could hold out for 24 years without finding out more.”

At the time of Dorr’s death, his wife, Jane Sawyer Dorr, and stepson Jeffrey Sawyer were suspects. Both had been with Dorr in the park but returned home earlier. Soon after the murder, Jane Dorr and her son moved to Connecticut.

“This unsolved homicide went cold too quickly,” Busche told the group. “Now that we have new forensic tools, any leads will be thoroughly refreshed. We are also looking for new leads and additional suspects.”

In 2015 Westchester Crime Stoppers and a private foundation offered a $6,000 reward for information about Dorr’s murder. Last January, Crime Stoppers posted an additional $2,500 reward regarding the Dorr case.