In what could only be described as an otherwise uneventful football weekend along the Section 1 circuit, the three reigning Section 1 champions of the Examiner area – Class AA Carmel, Class A Somers and Class B Pleasantville – continued to do what they do better than the rest of Section 1: WIN!

PLEASANTVILLE QB Aidan Picart hit on an efficient 10 of 13 passes for 144 yards and three touchdowns − two to his brother, Daniel – plus a 17-yard touchdown pass to Louis Sdao. Daniel Picart rushed for 164 yards and the NYS Class B runner-up Panthers (2-0) cleared a major hurdle by knocking off last year’s sectional finalists.

“I guess it took a week to get settled in,” first team All-NYS player Daniel Picart said, “and now we’re feeling more comfortable doing what me and Aidan are supposed to be doing and trusting each other more. Also, credit to our linemen, who played out of their minds on pass blocking and run plays making huge gaps for me to run behind.”

Chad Saragganonda, Brian McPhee and Owen Mooney each had a sack for a stingy defense that has allowed just nine points in two games for a Pleasantville outfit that has the look of a repeat offender as it enters Week 3 against host Bronxville (1-2).

SOMERS was who we thought they were in the second half of its 41-7 rout of host Eastchester Saturday when Tusker QB Matt Fitzsimons took over in the second half, hitting on 11 of 14 passes for 173 yards and a touchdown through the air while rushing two TD’s. Speedy Somers  RB Ravi Dass Jr. needed just four touches to amass 114 yards and two scores for the Tuskers (2-0).

“I think we are starting to click a little more and more as the days go on,” All-NYS Tusker OL/DL Jake Polito said. “ Definitely some positives to take away from the game, but I don’t think we have scratched the surface yet.  We gotta take the weeks as they come and keep up our practice habits to keep improving. What separates Somers football is that enough is never enough.”

YORKTOWN was within inches of pulling off a massive upset before falling at Rye, 13-12, when the Garnets (3-0) erased a 12-0 deficit late in the third quarter. Husker QB Caden Gonzalez hit on 6 of 18 passes for 118 yards and a TD strike to Thomas Costello (3 catches, 58 yards). Conor Duncan had eight tackles, two sacks and a safety on defense while Jack Freone (9 tackles) and Ryan Vogel (8 tackles) each had big defensive days for the Huskers (2-1).

“The result wasn’t what we wanted but this team is going to give everyone their best shot,” Husker Coach Pantelis Ypsilantis said. “Yorktown will not back down from anyone and will always grind. Sometimes we will come up short, but we are going to empty the tank and give it everything we have week in and week out. These guys are fighters and from a coaches perspective, you can always work with that. I couldn’t be prouder of their effort.

FOX LANE’s Max Travis tossed a career-high 231 yards and two touchdowns on 16 carries in the Foxes’ 21-14 win over host Nyack. The junior also snagged a 62-yard touchdown pass from QB John Czernyk, who struck gold on 7 of 10 for 115 yards in his first varsity game for the Foxes (1-2).

“Harrison had good size and they pushed us around up front,” the coach admitted. “They are a very disciplined team and defensively made some big plays when they needed them. “

Brewster QB Massimo Parrello threw for 298 yards, hitting on 15-22 passes for three TD’s.  Harrison’s kicking game was a weapon as they kicked five of six kickoffs into the end zone and also kicked a field goal. Harrison also took advantage of big play, scoring on a pick six and a kickoff return.

Yonkers Force didn’t make it easy on reigning NYS Class A A Champion CARMEL, who broke the game open in the second half of a 32-6 road win Saturday at Roosevelt High School. Carmel sophomore RB Tristan Werlau rushed 13 times for 129 yards and a score while QB Matt Gay hit on 4 of 6 passes for 63 yards, including a scoring strike to Chris Nerys. Ram RB/DB Nick Rosaforte had a terrici two-way game, rushing for a score and led the defense with eight tackles and two sacks.

The bad news for Carmel’s foes, including Week 3 opponent RCK, is that the Rams (2-0), who have won 18 straight games, are getting closer to getting back both Matt Risley and Thomas Keating, a pair of skillful, two-way players, who have been injured.

BYRAM HILLS improved to 3-0 after a 35-14 thumping of Pearl River. Bobcat QB Jon Accurso fired two TD passes and rushed for another. Bobcat RB Gavin Javorsky added two rushing touchdowns for the Bobcats (3-0), who reeled off scores on the first five possessions of the game.

HALDANE QB  Ryan Van Tassel was an efficient 9 of 18 for 103 yards and two TD passes to Thomas Tucker (from 20 and 26 yards out) in the first half of the Blue Devils’ 12-9 win over Albertus Magnus, who was limited to 119 yards of offense. Haldane forced three turnovers, including Tucker’s interception and two forced two fumbles. Blue Devils RB Evan Giachinta added 101 yards on the ground on 15 carries.

PANAS QB Travis Carlucci rushed for 125 yards and a score on six totes and drilled 6 of 7 passes for 77 yards and a touchdown in a 42-8 win over Poughkeepsie. The versatile junior also electrified the home crowd with a punt return to the house. Panther RB Paul Ronga had 10 carries for 119 yards and two touchdowns for the Panthers (2-1). Dan Leonard led the defense with two sacks.

Examiner-area coaches are encouraged to hit up rgallagher@theexaminernews.com for inclusion in our weekly Grid Notebook. 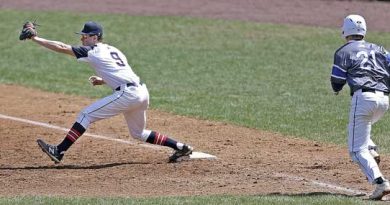 Chicoine’s Hitting and Pitching Leads the Bobcats Past Hen Hud