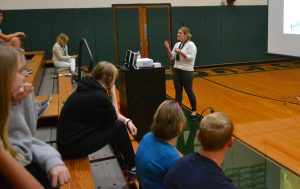 Last Wednesday Mary Ann Flatley, a licensed mental health counselor and the student assistance counselor for the Pleasantville School District, stood before 25 students in the Pleasantville High School gym. She pointed to a large screen behind her showing a box for a JUUL starter kit for electronic cigarettes. Then she held up an Apple iPhone box.

“What happens when you see these two boxes?” she asked. “Do you make a connection between Apple and JUUL”

Students nodded and they became curious and engaged.

Vaping has been recognized as an epidemic by health officials. Its related illnesses and eight associated deaths are making headlines. JUUL Labs Inc. dominates the U.S. e-cigarette market and they advertise their vaping devices and e-cigarettes on social media, specifically targeting teens and adolescents.

JUUL has been scrutinized for its strong appeal to young people and the company has reportedly taken steps to reduce its advertising. Pleasantville High School Principal Joe Palumbo said the district is being proactive about the vaping issue.

“There has been an early push to meet with students at the beginning of the school year to promote wellness,” Palumbo said. “We talk about the impact of peer pressure, especially through the persuasive power of digital media. We tell students that their digital fingers have the ability to push the off button.”

Flatley’s wellness classes at Pleasantville High School and Pleasantville Middle School seek to educate teens and adolescents about the dangers of vaping. Involved with the school district is John Mueller of Pleasantville STRONG, a federally funded drug-free community coalition working to reduce underage drinking and drug use.

Mueller said the group has warned against vaping for some time.

“One of the things we do on Back to School Night is help parents try to detect if their children are vaping,” he said.

Called Hidden in Plain Sight, the group constructs a mock bedroom typical of a teen. Hidden in the room are certain items, such as small thumb drives, used to charge e-cigarettes. Parents search for items that provide clues about whether their teens are vaping.

“We are able to point out to parents what they missed,” Mueller said. “We just don’t know all the long-term pulmonary damage vaping causes because it’s so new. It’s really scary.”

Many of the high school’s wellness classes replace the regularly scheduled physical education classes led by Myndi Hill, who sat in on Flatley’s presentation. Flatley told students that vaping was originally advertised as a way to quit cigarette smoking and led many to believe that e-cigarettes had no nicotine, which is not true.

She showed another picture on the screen of 18-year-old Chance Ammirata of Miami, who landed in an emergency room in August because he couldn’t breathe. Ammirata starting using JUUL e-cigarettes when he was 16 and doctors told him a hole appeared in his right lung. After they repaired his lung, his surgeon told CBS News that Ammirata’s lungs were inflamed and could have come from something he’d been inhaling.

Ammirata blamed his condition on using JUULs, and has started a social media campaign (#LungLove) to persuade teens and adults to stop. There was a hushed silence when the students saw a picture of Ammirata.

Flatley explained how certain substances used in vaping flavors become heated and turn into an aerosol or vapor when inhaled into the lungs.

“There’s a lot we still don’t know about the effects of vaping, but we do know that lung ailments have been tied to vaping,” she said.

“It’s important that you really be informed about vaping,” Flatley said. “It’s not wrong for you to be mad that you are being targeted by people making billions of dollars off the stuff that’s makes people sick.”

She said some students may have very little knowledge of vaping, while others could be struggling to kick the habit.

“To just stop is really, really difficult. If you want to come up with a plan to stop, I can help you do that,” Flatley said. “Come into my office and we can talk about how to ride the wave of craving.”

At the end of the session, Superintendent of Schools Mary Fox-Alter, spoke emphatically about the dangers of vaping.

“Nicotine is the most addictive substance in the world, and I want these people to stay as far away from you as possible. I don’t want you near this stuff, I don’t want you to get addicted, and if you are experimenting, I want you to reach out to Ms. Flatley,” Fox-Alter said. “The most important resource in this whole country is you. So anybody that is trying to addict the most important generation of this moment, infuriates me.”