Skip to content
Government The Examiner
December 1, 2021February 22, 2022 Abby Luby Pleasantville
We are part of The Trust Project

The Pleasantville Village Board voted unanimously last week to prohibit the operation of retail cannabis dispensaries and consumption lounges in the village.

At the required public hearing prior to voting on the opt-out resolution, Mayor Peter Scherer noted the board has held extensive public meetings over the past few months, participated in multiple discussions and received extensive feedback on the long-range impact of retail pot stores in the village.

“As a result, I think I can speak for the board that we are unanimously of the view that we should opt out of retail dispensaries and consumption establishments,” Scherer said. “There are many conflicting views about this but it is a rapidly changing world. Our decision to opt out is reversible in the future if some future Village Board should see it otherwise, but the failure to opt out now is not reversible.”

New York State gave municipalities until Dec. 31 to pass a law to opt out of allowing retail cannabis establishments and weed lounges. Anyone favoring retail marijuana sales in the village would have to submit a petition for a permissive referendum, which would require 1,041 signatures or 20 percent of enrolled village voters, to trigger a vote.

About a dozen people attended last week’s regular board meeting but none offered comments. The resolution was read by Trustee Paul Alvarez followed by a roll call vote where all trustees voted in favor of the new law. That was followed by a round of applause.

Scherer mentioned that the law can be challenged at a later date.

“But that seems highly unlikely in the circumstance but remains a legal possibility,” he said.

One of the biggest concerns voiced by the public was how on-site lounges could negatively impact youngsters. Many have overconsumed cannabis candy such as the popular marijuana gummies.

Advocating for the law to opt out was Laura Moore, coalition coordinator of Pleasantville STRONG, a group that works to prevent drug and alcohol use among youth, and Pleasantville Superintendent of Schools Mary Fox-Alter.

Many claimed that retail marijuana sales within the village would lead to increased use and drug addiction, while legal dispensaries posed challenges for local police.

Pleasantville Police Chief Erik Grutzner said there were no reliable tests for consumed cannabis and if someone was driving under the influence of pot it would be difficult to measure the level of intoxicants.

The local opt out goes into effect 30 days after adoption of the resolution. 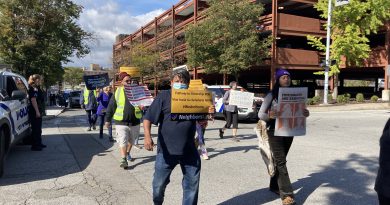 Rally Held in Peekskill to Demand Pathway to Citizenship

On Your Mark, Get Set, Go for Bedford BikeRun This Sunday