After two years of discussions, a village-wide survey and three contentious public hearings, the Pleasantville Village Board voted unanimously last week to ban the use of fuel-powered leaf blowers from May 15 to Sept. 30.

Electric plug-in and battery-operated leaf blowers are not impacted by the restriction. However, in compliance with the noise ordinance, the law prohibits the use of all leaf blowers from 7 p.m. to 8 a.m. Monday through Friday and 5 p.m. to 9 a.m. on weekends and federal holidays.

All leaf blowers will be allowed to be used from Oct. 1 through May 14 to help property owners during the fall leaf season and during spring clean-up.

Before voting, village Trustee Nicole Asquith, who initiated the effort to curb the use of gas-powered leaf blowers, briefly recapped how the board crafted the new law.

“Certain revisions were made. One was to put off the enactment of this law to next year, which gives us a year to get the word out,” Asquith said.

Pleasantville joins most other municipalities in Westchester that now have leaf blower regulations on the books.

In 2020, the Pleasantville Conservation Advisory Council presented health and environmental justifications for banning gas-powered leaf blowers. This spring, public hearings on the proposed law were held on May 9, May 23 and June 13.

During those two years, the village received hundreds of e-mails complaining about the adverse environmental and health impacts of noise and air pollution caused by gas leaf blowers used in their neighborhoods. Many complaints came during the pandemic when many worked from home and were disrupted by the noise of the fuel-powered blowers.

Opposing the ban were several landscaping companies, who claimed using electric blowers with limited battery power would result in it taking longer to complete work on a property and would jeopardize their businesses.

The proposed law was revised, eliminating the country club exemption but allowing the school district to use fuel-powered motorized leaf blowers only to redistribute the infill on the playing surface of the natural turf fields when it is displaced by heavy rain.

Asquith said for those who have spent money buying the gas-powered equipment, there could be relief from the state.

“New York State is now considering a number of proposals, one of which is a rebate program for higher-grade electric-powered landscaping equipment that would be helpful to landscaping companies,” Asquith said

Pleasantville Mayor Peter Scherer said the board came to a compromise solution that reflected and respected all concerns.

“There’s no action that we take that will be universally accepted by all, but I think that I speak on behalf of all my colleagues that we’re talking about a problem that (has) a significant and problematic impact on lots of our neighbors in this community,” Scherer said. “For that reason, we are trying to balance the rights of individuals to manage their property as they wish but also the rights of neighbors to enjoy their property.” 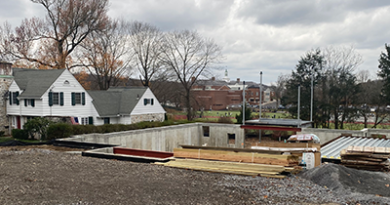