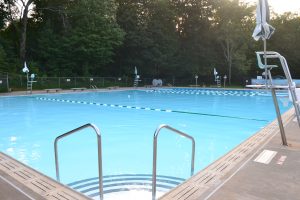 Pleasantville’s village pool will be empty this summer after officials made the decision that it would be too risky to open the facility because of the coronavirus.

There will be no pool season or summer camp in the Village of Pleasantville this year.

The closures, which were announced at the board’s Monday evening work session, were driven mainly by the numerous health risks posed by the coronavirus.

“The business of having too many people in and around the pool, in the restrooms, seems like an extraordinarily difficult problem,” said Village Mayor Peter Scherer. “I think we are all of common mind that the pool is not opening Memorial Day and it seems less than likely that the pool will open at all.”

While not the first Westchester community to reach that conclusion, Pleasantville is the first in the immediate area to make that decision.

Matt Trainor, the village’s superintendent of Recreation & Parks, said Pleasantville obtained its county permit to operate the pool in February, but more recently was informed by the county that it couldn’t open until the state’s restrictions are lifted.

It does not appear that the seven counties Westchester is grouped with will collectively qualify on Friday to begin a Phase I reopening under a set of seven metrics set forth by the state. Once the region, which also includes Putnam, Rockland, Dutchess, Orange, Ulster and Sullivan counties, is allowed to begin a reopening, recreation and education venues are part of the fourth and final phase of operations to return. Gov. Andrew Cuomo has said that there will need to be about two weeks between phases provided each region maintains its thresholds based on data.

Another factor is that the majority of lifeguards and camp counselors are typically 16 to 18 years old, Trainor said.

“We would be putting them at risk as well,” he said.

Trainor said he was concerned that if the pool and camp opened, social distancing would be difficult to enforce, particularly in the water and the locker rooms.

“If you get one potential case of COVID coming out of your operation, whether it’s true or if it’s a rumor, do you want to deal with that as well?” Trainor added. “It makes sense and I’m sad about it. I never thought I’d see this.”

Even if restrictions were lifted by mid-summer, given the current financial strains on local municipalities, the economic viability of the camp and pool for this year would be questionable.

“Hypothetically, if the village was allowed to open (the pool and camp) in August, the economics of it fail pretty badly in an environment where we will be looking to avoid (financial) losses,” Scherer said.

Memberships would have to be prorated while staff rates and costs to re-open the facility would remain the same.

Paul Alvarez, who will replace Trustee Steve Lord on the Village Board in September, said Pleasantville could face potential liabilities.

“I’m not seeing what the positives are if we open even for a month,” he said.

The decision to close the pool was prompted in part by calls from a handful of residents asking about permit requirements to install above-ground pools. Pleasantville Building Inspector Robert Hughes said village rules stipulate above-ground pools be no more than 100 square feet.

Officials in North Castle and Mount Pleasant have not yet made a decision about those municipalities’ camps and pools. The same is true for the summer camp in New Castle, which does not have a municipal pool.

Mount Kisco Mayor Gina Picinich said the village is holding out hope for a partial pool season and is taking steps to be able to open on short notice, if it can.

“To that end, we are working to get the facility ready so that we can be flexible and able to open with a quick turnaround,” Picinich said. “We want to be able to offer our residents access to the facility if at all possible.”

The village is also exploring alternatives to traditional camp, she said.

Martin Wilbur contributed to this article.