Government The Northern Westchester Examiner
May 5, 2022May 6, 2022 Rick Pezzullo 321 Views 2 min read
We are part of The Trust Project

Increased traffic from a mixed-use development on Underhill Ave. proposed under Yorktown’s recently adopted zoning overlay district was the main concern expressed recently by members of the town’s Planning Board.

During an April 25 work session, planners focused on how Underhill Farm, planned on the former Soundview Preparatory School campus at 370 Underhill Ave., would set the tone for other development envisioned in the area.

“We need to come up with a holistic plan to deal with all the traffic that is coming our way,” said Planning Board Chairman Richard Fon. “We want to see responsible development. How we go about tackling that hurdle (traffic) sets the stage for how we go forward.”

Unicorn Contracting is proposing 148 residential units (64 one, two and three-bedroom apartments, 52 three and four-bedroom townhouses and 32 one and two-bedroom condominiums), 11,000 square feet of commercial space and an adaptive reuse of the property’s historic mansion.

As part of the $60 million project, the historic Underhill House is slated to be transformed into a community resource and gathering spot. In addition, the pond will be completely restored with a $150,000 investment and complemented by walking trails, sitting areas and a new pedestrian gateway at the estate’s original entrance at the intersection of Rte. 118 and Underhill Ave.

Planner Aaron Bock, a former town supervisor, asked Unicorn engineer Joseph Riina if the proposed layout was the best for what he termed “a signature site in town that has a chance to connect to other sites.”

“A lot of what has been planned is done to preserve the original structure. We tried to maintain that as much as possible,” Riina said. “We’re trying to maintain that park-like quality as well as the historic presence that it has. It’s not like we just plopped everything where we thought it was best. There is some logic to it.”

Phil Greeley, a traffic consultant for Unicorn, said a study of the intersection at Underhill and 118 showed approximately 1,600 vehicles travel through in a one-hour period. He said Unicorn was willing to contribute $450,000 to make improvements to the intersection, which he estimated would cost between $750,000 and $1.5 million depending on what changes were made.

“Our approach is to give you the design that covers all the projects on the table,” Greeley said. “This addresses the big picture.”

Addressing a question from Fon, Greeley said a roundabout at the intersection was possible, but not recommended.

“It could be done. I don’t think it’s the best way to go,” Greeley said.

Yorktown Councilman Sergio Esposito, who was in attendance, said Underhill Farm would provide the town with an economic boost.

“I think the project has benefits to the business community in town far beyond what people are imaging,” said Esposito, former president of the Yorktown Chamber of Commerce.

Last December, the Town Board voted to adopt overlay district zoning for the two business hamlets. Town officials had been considering the creation of overlay districts for about 18 months with a goal of encouraging creative redevelopment approaches. 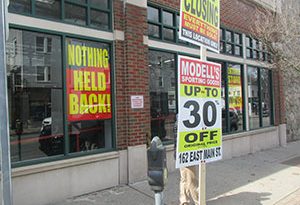