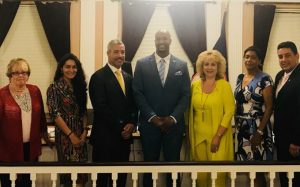 Fresh off a Democratic sweep in the November elections, the seven members of the Peekskill Common Council will be receiving raises in 2020.

Last week, the council voted themselves salary increases—the first time councilmembers in the city have gotten a pay hike since 2003.

“I think that’s only the right thing to do,” said Deputy Mayor Kathleen Talbot, who was reelected to a new four-year term last month.

“The time and commitment I put in kind of speaks for itself,” Rainey said in justifying a raise. “In the City of Peekskill, we have shown our commitment to the community.”

Councilwoman Vanessa Agudelo said she would have preferred councilmembers be given the option to get health benefits from the city instead of a bump in salary. She maintained health benefits could help “diversify” the types of candidates that run for office in the city.

City Manager Richard Leins said the approximately $25,000 needed to cover the raises would come out of the city’s contingency fund, which has a balance of about $100,000. He noted it would not affect the projected tax rate increase in the 2020 budget, which was slightly more than one percent.

However, he stressed if councilmembers received health benefits from the city “there’s more money at stake there, but it’s not overwhelming.”

Councilmembers said they would address health benefits at a future work session.

Meanwhile, at Rainey’s request, the council tabled a resolution for two weeks to hire a firm to do a search for a new city manager.

Rainey noted Leins’ contract with the city expires on December 31, but did not elaborate, although reportedly Leins is planning to retire.

Leins, who has worked for Peekskill for more than four years, submitted his resignation in July 2018 and was slated to depart in mid-October of that year, but then had an apparent change of heart.

Leins, who previously served for more than a decade as village manager in Ossining, was initially  brought in as interim city manager by former Mayor Frank Catalina after ex-city manager Anthony Ruggiero, who butted heads with Catalina, left for a job in the City of Beacon.