Countless offensive Facebook posts written by Robert (Bobby) Palazzo, a candidate running for the Carmel Board of Education, recently resurfaced online — leading him to drop out of the race Sunday afternoon.

In posts circulating from 2009 through 2018, Palazzo made frequent racist, Islamaphobic, anti-immigrant, sexist, anti-Semitic and transphobic remarks, often directed at former President Barack Obama and other Black politicians and public figures.

“Joke of the year: why can’t Michelle Obama wear a mini-skirt? Because her penis would stick out of the bottom,” another January 2010 post read.

“Have you noticed that if the letters in ‘illegal aliens’ are rearranged and a few more letters are added, it spells out: ‘Go home you free-loading, benefit-grabbing, kid-producing, violent, non-English speaking a-holes and take those other hairy-faced, sandal-wearing, bomb-making, goat-loving, raggedy-ass bastards with you?’” another January 2010 post stated.

“Secret Service uncovers plot to kidnap the President,” a February 2010 post with an image of a watermelon under a box propped up with a stick and string said.

“Tiger Woods is giving a press conference today. He is going to admit he is the pretty Williams sister…woman with weeners. Tiger, Wendy, Serena, Venus and Michelle Williams Obama were all born men,” another post from February 2010 reads.

“To capture the Hasidic vote, Hillary will be Jewish at Various times during her campaign,” a July 2016 meme-based post stated with an edited image of Hillary Clinton with a beard.

In a phone interview Sunday afternoon, Palazzo, 70, maintained all of his posts were tongue in cheek, often critiquing the Obama administration which he disagreed with, and were not racially motivated at all.

He also said that, at the time, he was switching careers in his late 50s, which put him “in a bad way.”

Palazzo said he has lived in the Carmel community for 40 years and is well-respected and well-liked.

“I’ve done a lot of good things with the Knights of Columbus and my church,” Palazzo said. “I am in no way racist. I have friends of all colors, shapes and sizes.”

Melissa Jay-Orser, a Carmel parent, said in a Facebook post that a prospective school board trustee has an obligation to treat and protect all members of the school community equally — including Black, Jewish, Muslim, LGBTQ+ and immigrant students and staff.

“A man like Bobby Palazzo who is willing to put his hatred on social media does not care how his hate divides and destroys a community like Carmel,” Jay-Orser said.

Palazzo said he believes the situation has spiraled out of control and has damaged not only his reputation but also that of his family, grandchildren and nieces and nephews in the district who have the same last name.

“I’m only running for a school board. I’m not running for president or any political position,” Palazzo said, referencing two videos Jeff Pearlman posted to YouTube on May 6 and May 7 detailing Palazzo’s past posts. “He made me like I was an animal.”

“Bobby is 70 years old, so when he was posting this stuff, he was 60,” Pearlman added. “It’s not a youthful indiscretion.”

In an initial response Palazzo posted on Facebook, he said, although it wasn’t his intent, he apologized to anyone he may have offended with his pasts posts. However, he asked, if the comments he made were so racist, why were they not taken down by Facebook.

“I am being unmercifully attacked,” Palazzo said in the statement. “I refuse to be cancelled, and I would appreciate your support.”

On Sunday, Palazzo said that while he was initially running because he’s opposed to critical race theory being taught in schools, he is now dropping out of the race altogether.

“I was [running] to get on the board for the betterment of the school district to protect the taxpayers, parents and students,” Palazzo said. “I was running for a non-salaried position because of what’s being taught in our schools — critical race theory and indoctrinating [students] with sexual stuff.”

“[Now] it’s not worth the aggravation,” Palazzo said. “The damage is done.”

Palazzo added that growing up he and his friends made comments like the ones he posted to Facebook, and it was never deemed racist.

“When I was growing up, you could do and say anything you want,” Palazzo said. “Now it’s a whole different world.”

In Carmel, three seats are up for grabs. Board President Eric Mittelstadt is looking for a new three-year term, as is Trustee Jason Paraskeva. Vice President Matt Vanacoro is not seeking a new term.

Palazzo’s name will remain on the ballot. Due to Palazzo’s withdrawal, the district has reopened petitions until Tuesday, May 10 at 5 p.m., according to a notice posted on Carmel Central School District’s website. 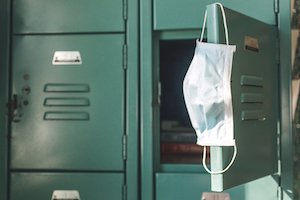 Local Residents Shed Their Hair in Honor of Smiling Warrior