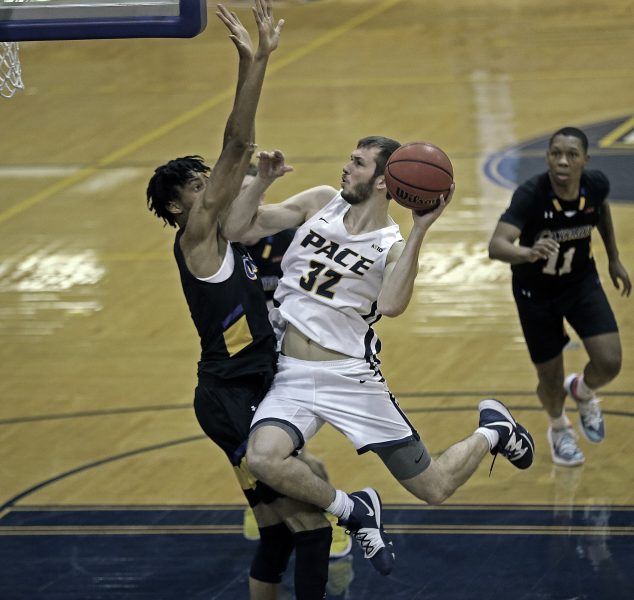 It’s been quite a while since the Pace men’s basketball team began a season with three consecutive victories.

Well, the last time it happened, all the way back in 2003, LeBron James was a rookie with the Cavaliers shooting a career-worst 42 percent from the field, Eli Manning still hadn’t entered the NFL, Aaron Judge and Pete Alonso were hitting their homers in Little League uniforms and Rafael Nadal hadn’t yet won the first of his 12 French Open titles.

But on Saturday afternoon inside the Goldstein Fitness Center, the Setters finally did what their 15 most recent predecessors couldn’t. With a 97-55 rout of visiting Concordia College, Pace improved to 3-0 while providing fans with a glimpse of its solid returning core and a couple of promising freshmen.

Peyton Wejnert and Brandon Jacobs both finished with 18 points and newcomer Bryan Powell continued to impress with 15 points and 11 rebounds as the Setters used a dominant second half to break open a game that was close for the first 20 minutes.

“I think we’ve established an identity here the last couple of years,” said Setter head coach Matt Healing shortly after witnessing the most lopsided win by a Pace team in 27 years. “When I first took over, we were kind of trying to find ourselves a little bit. And now, with some guys that have played together for a couple years and the continuity of that, I think fans can expect us to play tough, play hard.”

Making their home debut following double-digit wins in their opening two games, the Setters found themselves trailing Concordia 9-5 just four minutes into the game. But a 12-0 burst highlighted by seven points from Powell, the 6-foot-6 freshman forward already averaging a double-double in his first week of college ball, quickly gave Pace a lead it never lost again.

The Clippers were still within 36-26 at halftime, but Pace opened the second half with an 18-4 spurt over the first five and a half minutes. Eight of the points came from Wejnert, a 6-7 senior forward who led the team in scoring and rebounding a year ago. By the time the big run was concluded with a 3-pointer from Ray Montilus, the Setters’ lead was suddenly up to 24 points.

“It was really about just sharing the ball,” said Healing, now in his fifth season at the Setter helm. “I thought the ball was sticking a little too much in the first half. But credit to our guys making the adjustment and getting a little more comfortable out there. Concordia’s a solid team regardless of their record. So we figured it would be a dogfight. It was certainly that way for the first half.”

The Setters, just 14 of 34 from the field in the first half, shot 57 percent over the final 20 minutes as they outscored the Clippers by a whopping 61-29 margin. Wejnert, held to just four points in the opening half one week after scoring a career-best 29 points in the first game of the season, erupted for 14 more after halftime.

By the late stages of the contest, the Setters’ starting five was sitting on the bench watching seldom-used teammates add to the big lead. 13 different Pace players saw playing time, and 10 of them scored a basket.

“Seeing them out there having fun, seeing them be rewarded for all the work they’re putting in was great, was special,” said Healing, who knows one-sided games like Saturday’s will be a distant memory when Northeast-10 Conference play starts. “We know we’re gonna have some significant challenges coming up as we get into conference play. So just another good tune-up for us.”

A year ago, the Setters won 16 games, including their first in the NE-10 playoffs in a dozen years. With the trio of Wejnert, Jacobs and Austin Gilbertson playing together for a third straight year, and the arrival of Powell and Christian Adams, Healing is expecting even more this time around.

“I think we have one of the better frontcourts in our league, maybe in our region,” he said. “A lot of guys pay attention to Wejnert, and obviously he’s a special player and does a great job, but to have two young guys like Powell and Adams just playing and rebounding and just being where they’re at from a maturity and physicality standpoint is impressive already.”

With the Setters’ first conference game just a few days away, Healing is hoping his team’s best start in more than 15 years will carry over for a while.

“We’re excited to get it going, so we like where we are right now,” he said. “Obviously with our league it’s challenging every night. But we’re excited for the challenge. A little loftier goals this year with a little more edge and experience on this team.”