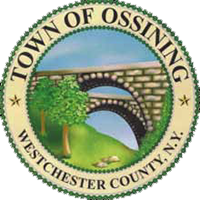 The Village of Ossining Board of Trustees is scheduled to vote this week on changing the longtime village seal.

The proposed change from a Native American head to a Double Arch is being spearheaded by outgoing Mayor Victoria Gearity and is slated to be on the tonight’s meeting agenda.

“The Double Arch represents our history and our community much better,” Gearity contended during a December 9 work session where she led an in-depth presentation on Zoom “It’s an iconic symbol.”

The first arch was built in 1837 by mostly Irish immigrants to bring water to New York City. There’s now a popular pedestrian walkway on top. Gearity noted the Double Arch is the only one of its kind in New York State.

Gearity mentioned the Double Arch seal is already being used in correspondence and communications from the Parks and Recreation, Police and Fire departments.

“It’s aligning with what we already do,” Gearity said.

The Double Arch seal was designed by Ossining High School graduate Daniel Aviles. A survey was circulated to residents in late November seeking input on the change and 77% of the 1,817 respondents favored the Double Arch.

“It was really a robust level of engagement,” Gearity said. “We reach out to the public all the time. Sometimes it’s crickets. This time it wasn’t. There was a groundswell of support from the community.”

In 2002, the Ossining School District changed its Native American mascot.

“The momentum of history has brought us to this point,” said Trustee Omar Lopez.

Trustee Manuel Quezada said he liked the Double Arch seal before questioning how the issue came to the forefront.

Deputy Mayor and mayor-elect Rika Levin and Trustee Robert Fritsche offered no opinions on the proposed change, saying instead they would weigh-in prior to the vote on December 16.