Skip to content
The Northern Westchester Examiner
June 20, 2017 Rick Pezzullo
We are part of The Trust Project

An attorney representing more than a dozen Verplanck residents has called on Cortlandt officials to immediately shut down a bus depot that has been operating for two years without approval.

Wayne Spector, who penned a seven-page letter to Supervisor Linda Puglisi and the Town Board on May 23, unloaded on the Planning Board during a June 6 public hearing, contending Montauk Student Transport and its employees had initiated an “assault” on a quiet, residential neighborhood.

“This has become a part of the neighborhood that didn’t exist before,” said Spector, representative for the Verplanck Neighborhood Coalition. “The board needs to understand the frustration of the neighborhood. They feel like they have been let down by the local government.”

Montauk originally submitted plans to the town in March 2015, and then resubmitted plans five months later, for approval for 92 parking spaces for full and van-size buses and 95 spaces for passenger vehicles, along with use of an existing 4,200-square-foot garage facility, on almost five acres. A stop work order was issued by the town’s Code Enforcement Office in 2014 for enlarging a parking lot, but that was resolved.

A stipulation was then apparently reached with town officials after Montauk paid a $10,000 civil penalty in June 2015 for a violation notice allowing Montauk to operate while pursuing Planning Board approval, with one of the conditions being that property taxes were paid in full. Spector referred to the stipulation in his letter as a “stand still” agreement.

“That agreement apparently contains no set time table for resolution of the unapproved use of the premises,” Spector stated. “It is open ended, containing only vague language requiring aggressive pursuit of site plan approval. The agreement was reached with the applicant without any consideration as to whether the use of the premises was appropriate and proper, and there was no apparent consideration of any environment or quality of life implications from allowing the unapproved use to continue pursuant to the open ended vague agreement.”

Residents in the surrounding area of 301 6th Street continued to maintain the small hamlet was not equipped to handle the daily traffic generated by the school buses and employees of Montauk Student Transport, which currently services the Putnam Valley School District.

“Three years and counting is more than enough for this community to bear,” said Bernie Vaughey, a more than 60-year resident of Verplanck. “The neighborhood has been held hostage by Montauk long enough.”

Others expressed concern about safety to residents walking on roadways or simply trying to get into their vehicles.

“Getting into our car is a challenge,” said Kim O’Brien. “It’s bad. It’s a free-for-all between the speeding and the garbage. It’s wearing on all of us. It’s not fair.”

One Planning Board member, Thomas Bianchi, was sympathetic to the pleas of residents.

“I’m concerned about safety. As an interim measure, can we require more speed enforcement by police in the area?” he said.

A traffic study and noise study connected to the project are scheduled to be discussed at the Planning Board’s July 5 meeting. 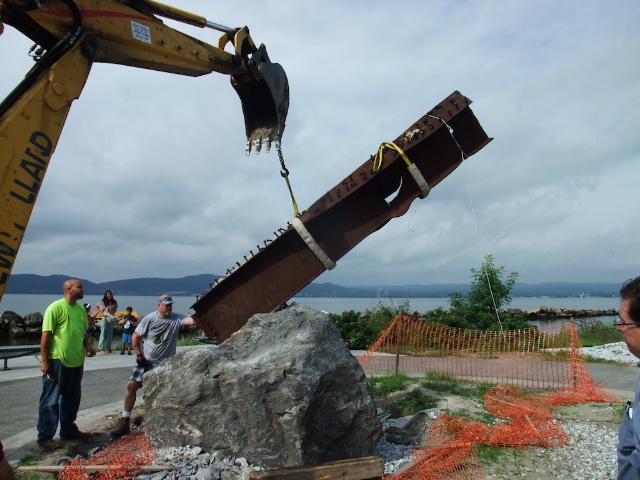 Tri-Municipal Memorial to be Dedicated on 9/11