With a constant need to resettle refugees from around the globe, members of four Westchester communities have formed a new organization to help make newcomers’ transition to living in the United States a little easier.

Ossining for Refugees, a nonprofit established in October, is on the verge of helping to resettle its first federally-sponsored evacuee, an Afghan woman who fled the Taliban in August and whose cousin and family live in town.

A wide range of volunteers from Croton-on-Hudson, Ossining, Briarcliff Manor and Pleasantville, including houses of worship and their congregations and more than 20 community organizations, helped Ossining for Refugees get off the ground. In the short amount of time since the onset of the crisis in Afghanistan, enough volunteers have lent their time and efforts and raised enough money to have a furnished apartment ready for her to move into, arranged for online English classes and lined up other services.

While volunteers from the four communities have been pouring time, energy and resources into the effort, Ossining, one of the most diverse and relatively affordable places in northern Westchester, has become the home base for the organization. It also helps that the Mount Kisco-based Neighbors Link, which helps integrate immigrants into the community, and Open Door Family Medical Centers each have a location in Ossining, making the community the logical choice for the organization to include it in its name.

“We’re more than ready,” said Dana Levenberg, Ossining’s town supervisor and one of the co-founders of Ossining for Refugees along with Ted Buerger, Eric Thielking and Sofia Bator, herself an Afghan immigrant who lived in Ossining. “We want her to come to Ossining so all can embrace her.”

The incoming refugee, who is only being called F to protect her identity, has been having her case processed by federal authorities as she and thousands of others from Afghanistan have been waiting at a U.S. Army refugee center in New Jersey, said Peter Russell, a Pleasantville resident and one of the key participants of the group.

But for those wanting to make life easier for a new arrival and properly executing the effort, it takes hard work, training and covering a multitude of issues such as housing, jobs, health care, transportation, English classes, social orientation and other tasks.

Russell said Ossining for Refugees gelled very quickly this fall, with about a dozen volunteer-staffed teams that concentrated on each of those categories.

There is an apartment ready for F to move into and a welcome guide that has been translated into her native Dari. The goal is to help the refugees to integrate into American society within six to 12 months, Russell said. That includes making sure they learn English if they don’t already know the language, discovering their skills and interests and seeing if they are entitled to any social services.

Since shortly after arriving at the refugee center, F has been taking an online English course through Westchester Community College, which members of Ossining for Refugees assisted in her enrollment.

“A lot of importance is attached to helping the residents get up to speed as fast as possible with the English language because that’s the gateway to so many other things,” Russell said.

The volunteers also received guidance from the Hebrew Immigrant Aid Society (HIAS) and Catholic Charities, among other organizations, because there are strict requirements for community-based organizations to follow to help settle refugees such as culturally-appropriate food, said Cathy Dreilinger, part of Ossining for Refugees.

It also received mentorship from members of Hearts & Homes for Refugees, one of the leading community sponsorship organizations in Westchester.

“There are very strict rules and in the case of this particular evacuee, we weren’t supposed to make her the face of the story,” Dreilinger said. “The face(s) of the story really is the community stepping up in such numbers so quickly and being so willing to help and create this organization.”

Bator, who contacted the offices of Greenburgh Supervisor Paul Feiner, Rep. Mondaire Jones and U.S. Sen. Chuck Schumer, said she is gratified that the community has stepped forward and is ready to help refugees.

“I am amazed by how quickly volunteers offered to help and by their personal concern for these evacuees. It is a special community,” Bator said.

Levenberg said one of the overriding goals is to make sure the refugees are provided the proper tools so they can become self-sufficient as quickly as possible.

But the efforts do not come cheaply. To help settle the average family in a Westchester community costs about $20,000 to $30,000, Russell said. Costs can vary based on the size of the family. The website, www.ossiningforrefugees.org, includes a tab to donate, and volunteers are always needed.

Toward that end, Ossining for Refugees has partnered with Neighbors Link and Films on Purpose, a Pleasantville-based community organization that periodically holds film screenings related to social issues, to tentatively schedule its first official fundraising event on Feb. 17. The time and location have yet to be determined.

Russell said he sees the organization as an ongoing commitment and to continue even after most of the Afghan refugees have been settled. There are large groups of refugees from Congo, Myanmar, Ukraine, Venezuela and Syria.

“It is not for us to say where the next refugees will come from,” he said. “We will be happy to receive whoever they are.”

Levenberg said it is fitting that Ossining and several of its neighboring municipalities partner to try to make a difference for today’s immigrants.

“Ossining is a community that was built on the backs of immigrants and continues to be a place that welcomes our immigrant communities and where people can make it in America and they feel that they’re welcome and they feel they are supported,” Levenberg said. 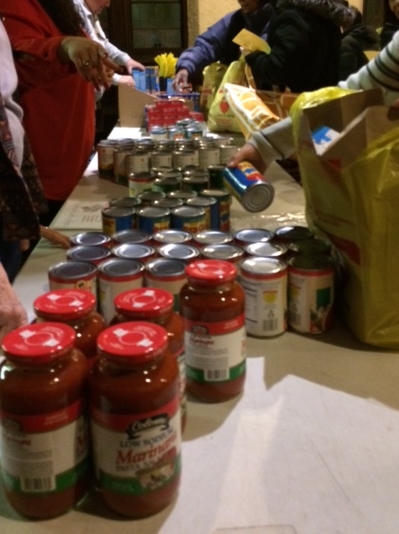