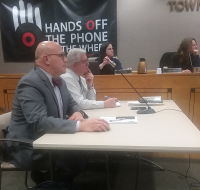 Traffic consultant Lou Luglio, who will be studying whether lower King Street in Chappaqua can function as a two-way street.

New Castle officials are exploring the possibility of turning lower King Street into a two-way street as part of the town’s effort to help revitalize downtown Chappaqua.

The Town Board told traffic consultant Lou Luglio of Saw Schwartz Engineering they would like him to conduct an analysis of the proposed change and whether it could improve downtown traffic circulation.

“We’re doing things that other towns are doing to revitalize the town,” said Supervisor Robert Greenstein. “It’s all part of a big scope. There are little teeny pegs in it but it’s all part of the big thing. We’re taking steps. Increasing the traffic flow downtown is one such step. All we’re doing is studying right now.”

There is the belief that during the evening rush hour from about 4 to 7 p.m. when Metro-North trains bring commuters home, shoppers avoid lower King Street. Once on lower King or Allen Place, a driver must continue past the train station and swing around the circle onto Woodburn Avenue, which is usually backed up after a train arrives.

It would allow motorists to park on Allen Place and then come out through lower King Street, avoiding the potential congestion. Drivers parked at the train station could also have that option.

Councilman Jeremy Saland said he avoids visiting lower King Street during rush hour because he doesn’t want to get stuck in traffic. If other residents are doing the same it could be hurting businesses.

“If I had access and could get in and out and not have to circle the entire train station, I would be a lot more inclined to park my car and go do something,” Saland said.

Luglio said that in order to have two-way traffic there would need to be parallel parking rather than the currently angled spaces along the north side of lower King. Each travel lane would be 12 feet wide along with the eight-and-a-half-foot parking lane.

The loss of about 10 spaces on lower King Street would be offset by a change to perpendicular parking on Allen Place, Luglio said.

“We obviously can do it and you have the room to do it and between the two areas there is really no loss of parking spaces, although people would have to walk a little more,” he said.

Two lower King Street merchants, however, were highly skeptical that the change would be an improvement for their businesses.

Vinny Milazzo, owner of Chappaqua Village Market, and Scattered Books owner Laura Schaefer said that a change to a two-way street has the potential to hurt their stores.

At Scattered Books, Schaefer said she frequently hosts parties for children and parents are not going to want to park on Allen Place to walk their young children into her business if they can’t find a spot near the store. Currently, many of her customers use the angled parking spaces, which have frequent turnover. Fewer spaces on lower King Street will likely mean customers won’t stop, she said.

“I would rather have the 16 spots on the street than 25 around the corner because this plan will kill me,” Schaefer said.

Milazzo told officials that he typically has about six to eight deliveries a day. At some point, trucks are likely to block traffic and there could also be a truck going in each direction around the turn where lower King meets Allen Place.

Luglio said he will provide the town an estimate of how much the analysis will cost. At this Tuesday’s work session, town officials said the initial estimate for a study is $39,500. The Town Board plans to discuss on Feb. 12 whether to move ahead with a study.