The Examiner
August 26, 2022 Abby Luby Chappaqua, New Castle
We are part of The Trust Project

New Castle fire commissioners voted last week to proceed with a $13.4 million King Street firehouse referendum that if approved by voters would expand the facility and include critical infrastructure on the second floor without completing a full build-out.

The motion to move forward with the scaled-down proposition was made by Commissioner Ed Frank with three votes in favor. Only Commissioner Chris Weddle opposed the motion.

An earlier resolution to accept the resignation of Commissioner Chairman Terence Hoey was approved shortly after the start of the meeting. Commissioner Brian Murphy was voted in as chair. Hoey did not return messages from The Examiner for comment.

The scaled-down project includes new bays to fit the larger modern apparatus and provide more room between fire trucks that will enhance safety for firefighters. In addition, new plumbing, HVAC, electrical, mechanical, two ADA bathrooms and an elevator will also be included on the second floor of the addition. The proposition would call for borrowing up to $13,416,291.

There was no mention of a referendum date; however, at the board’s July meeting, commissioners mentioned they were looking to schedule the referendum on the same date as the Board of Fire Commissioners election, which is typically held the second Tuesday of December.

At the July meeting, it was determined that renovating the firehouse’s original 1954 wing and the 1979 addition along with a full second-floor build-out would be too costly. The latest estimate for the entire project was $17.4 million, which the board majority concluded might make voter approval difficult to achieve.

“I think this is the wisest course of action,” said Commissioner Dwight Smith, referring to moving ahead with the scaled-back plan.

About a half-dozen members of the Community Liaison Committee (CLC) attended last week’s meeting. One explained that they needed to be better informed in order to advocate from a place of knowledge and help the community make up their minds about the project.

“We support the project and we think it is necessary,” said one member. “But we haven’t seen any analysis of comparable projects and we want basic answers, like what will the addition look like?”

Frank reminded the group that the committee was convened to help sell the project to the community.

“But some of your questions were not germane to the project,” Frank said in response to a member requesting more specific information about the renovation project.

The board has hired the Briarcliff Manor-based public relations firm Thompson & Bender to assist with communication with the community regarding the project’s key points.

Editor’s note: This article has been updated from the original version that appeared in print. 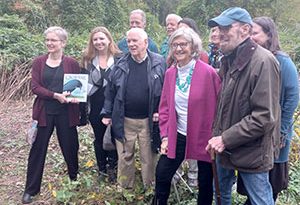 Mount Kisco Named One of the Most Livable Small Towns in U.S.