With incidents of hate and anti-Semitism on the rise, it was Ali Rosenberg’s vision to create a place in her hometown where future generations could learn about the horrors of the past and prevent it from recurring. 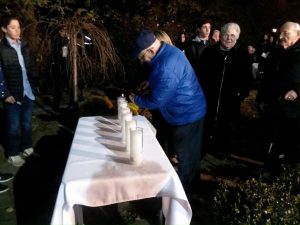 Holocaust survivor and Pleasantville resident Peter Somogyi lights the first of six memorial candles to remember the deaths of six million Jews during the Holocaust. The candle lighting was part of the program to dedicate New Castle’s Holocaust Memorial last night in downtown Chappaqua.

The New Castle resident, assisted by her friend and fellow town resident Stacey Saiontz, proposed to local officials the creation of a Holocaust memorial in downtown Chappaqua.

That vision became reality on Wednesday evening. In a ceremony attended by more than 200 residents, elected officials, several local Holocaust survivors and Chappaqua resident and former President Bill Clinton, the town unveiled and dedicated the monument near the gazebo on South Greeley Avenue. They were also joined by members of the student-run organization at Horace Greeley High School Educate Now on Understanding Genocide and Hate (E.N.O.U.G.H.), which Rosenberg also created.

“In establishing the new Holocaust Memorial, the New Castle Holocaust & Human Rights Committee and the Horace Greeley Club E.N.O.U.G.H., we now have a platform to teach our children in the community the lessons of the Holocaust, to recognize the dangers of hate, the perils of indifference and the importance of taking action,” Rosenberg said.

Saiontz, who like Rosenberg is the granddaughter of Holocaust survivors, thanked the town and the community for their support. The materials for the memorial and the landscaping were donated by Manzer Landscape Design & Development and the town’s Recreation & Parks Department helped prepare the site, she said.

The memorial consists of a stone with a plaque that includes the quote “Although no one can change the hate that has occurred through our past, to not acknowledge it and understand it, we’re forcing it upon our future.”

A few weeks ago, about 750 daffodil bulbs were planted at the memorial as part of the Daffodil Project, a worldwide project to commemorate the lives of the children lost during the Holocaust. The project hopes to plant 1.5 million flowers across the world – one daffodil for every child killed.

The dedication was scheduled a few days before this weekend’s anniversary of Kristallnacht, which occurred on Nov. 9-10, 1938. Kristallnacht is generally viewed as the start of the Holocaust when Jewish-owned business and synagogues across Germany were destroyed and thousands of Jewish men were taken from their homes, many never to see their families again.

Town Supervisor Robert Greenstein said just over a year after 11 members of a Pittsburgh synagogue were gunned down and about a week after the FBI arrested a white supremacist for targeting a Colorado synagogue, it is more important than ever that communities find ways to educate and fight hate. Studies have shown that more than 40 percent of millennials have little to no knowledge of some basic facts related to the Holocaust, he said.

“An increasing percentage of the population is unfamiliar with the Holocaust, now more than ever it’s essential that we educate all Americans about the dangers of hatred and the vital importance of standing up to evil,” Greenstein said.

President Clinton lauded Rosenberg and Saiontz’s efforts and urged the crowd of the importance to never forget the victims.

“These people and their faith and their dignity, their right to live…deserve from the rest of us an honest and complete memory,” Clinton said. “Passing that memory and that history along to every generation, and then the lesson that applies in every age, place and time to all human beings, people should never die because of who they are and what they believe – ever.”

A bench was also dedicated at the site to the memory of the father of Inside Chappaqua publisher and town resident Grace Bennett. Her father, Jacob Breitstein, who died earlier this year at 97, was a survivor of the Auschwitz-Birkenau death camp.

“I would have hoped by the time he turned 97 that anti-Semitism would be a scourge that would be eliminated,” Bennett said. “But it is not. There’s been a spike in it and I’ve very concerned about it. I’m concerned by it every day and I make it my business to fight it as his daughter in his memory.”

In addition to making the site a place for education and quiet reflection, the community plans to hold an annual event in the spring on Yom Hashoah, Holocaust Remembrance Day.