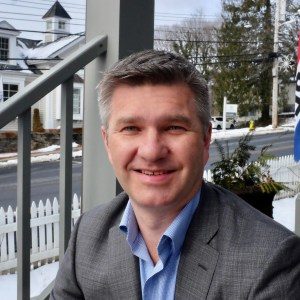 Republican candidate for New Castle supervisor Jim Smith found himself fending off the town’s Democrats who have been eager to point out a series of contributions to Donald Trump’s 2016 presidential campaign.

New Castle Democrats are charging that Republican supervisor hopeful Jim Smith has misleadingly portrayed himself as a moderate or nonpartisan candidate despite a series of contributions to Donald Trump’s 2016 presidential campaign.

The Federal Election Commission’s finance data showed Smith, who heads the Team New Castle slate with running mates for Town Board Lauren Levin and Sean Maraynes in next month’s election, made four separate contributions to Donald J. Trump for President, Inc. totaling $458 from May 4 to Oct. 23 in 2016.

No contributions were found for Levin and Maraynes.

The issue, which first surfaced in June during the Democrats’ challenge of the New Castle Republicans’ petition to gain the independent Team New Castle line, has exploded recently with extensive social media chatter.

Democrats have also argued that using the Team New Castle moniker has misled the public, making it seem as if residents will likely get a continuation of the current town administration. In 2013, the Republican-endorsed Team New Castle ticket, consisting of outgoing Supervisor Robert Greenstein, Councilwoman Lisa Katz and former councilman Adam Brodsky, swept into office. However, Greenstein and Katz are registered Democrats and Brodsky was an independent.

Smith said the Democrats are trying to steer conversation away from proposed solutions on town issues to focus on a hyper-partisan approach that they think will help them get elected, including using the donations as a key piece of their door-to-door campaigning.

“I’ve tried to make it clear that I’m not a Trump supporter,” Smith said. “It keeps coming up online on the Facebook groups, where people say you made donations to Trump. I said ‘Well, I made donations to Donald Trump in 2016. I made more donations than that to Hillary Clinton in 2008.

“I vote on issues. I gave that support on issues, and in 2016, I was very clear. There were some specific national security policy issues that I’ve been involved in because I spent time in that space and I thought Hillary Clinton was not focusing on those things and Donald Trump was. That’s the nature of those donations.”

Among the national security issues that he felt strongly about is a tough stance on China regarding trade and cracking down on its theft of intellectual property.

Smith, a former Democrat who said he worked on the Clinton-Gore re-election campaign in 1996 and the Inauguration Committee, made $550 in donations to Hillary Clinton during the 2008 primaries, records show.

In recent weeks, Democrats and their surrogates have been hammering away at Smith. Councilman Jeremy Saland, who is running for re-election and is part of the Democratic ticket with Smith’s opponent, Councilwoman Ivy Pool, and Town Board candidate Jason Lichtenthal, said he and his running mates are calling on their opponents to be forthright regarding who they support. He said the public has a right to know that information when making their evaluation.

“It’s one thing to voice your support for a person with a vote,” Saland argued. “It’s another thing to not just vote for that person but to take the time to donate to that person not once, not twice, but multiple times and that’s indicative of somebody who shares core beliefs, positions that are opposite of, or in conflict to, New Castle residents.”

Pool remarked that donating or supporting Trump doesn’t disqualify Smith or anyone else from running for public office but that it’s a legitimate matter for the public to know about and weigh. She said she was most troubled by the donations that came after the early October 2016 revelation of the Access Hollywood tape, where Trump boasted of sexual misconduct toward women. The Oct. 23 donation and the contribution to the inauguration came after that tape’s release.

“I do think voters in this community have legitimate questions about who he is and that he should be transparent and honest with residents and, in my opinion, he has not,” Pool said.

New Castle Republican Chairman Warren Gottlieb said the committee sought the best people to fill the ticket and looked for Republicans, Democrats and independents to represent it.

Gottlieb mentioned that the Democrats’ strategy has been an attempt to gain an advantage without having to talk about local issues. He predicted that infusing national politics into a local election will backfire on the Democrats next month.

“Jim Smith is without question, in my opinion, probably the most qualified person to run for public office in New Castle in the 14 years I’ve lived here,” Gottlieb said. “He also happens to be, in my judgment, the most decent.”

Levin, who said she thinks Trump should be impeached, said she has seen an ugliness in this race that makes it difficult for serious people to contribute. She called the debate over whether Smith donated to Trump “nonsense.” Political labels when running for town office should not factor in, she said.

“There are a lot of intelligent, committed hardworking people who live in this town and they are put off by this type of nonsense, and it is emblematic of what’s happening with our community and I have no patience for the double standard,” Levin said.

Smith said he does not support Trump and does not have any intention of donating again to his campaign. He said the President has squandered the chance to be a unifying force and has been a divisive figure, particularly culturally.

But he said the town’s Democrats have deliberately made sure his 2016 donations are a focus of their campaign rather than addressing town issues. Smith said what is of far greater relevance in a local election is where the candidates get their money from. He has maintained that he only accepts local donations as opposed to the Democrats who are the recipients of party committee money.

“To me it’s a shame that’s what has to occupy the conversation because we have local issues to focus on,” Smith said. “This is sort of counterproductive. I think the other side likes the fact that I have to spend my time talking about these things instead of what we are going to do with our downtown or how we’re going to fix our roads.”

Democratic Committee Co-chair Jane Silverman denied Smith’s claim that the contribution issue is a strategy or centerpiece of their campaign. Silverman said it is also a mistake to automatically separate national issues from local elections, as evidenced by the gun debate.

Smith, according to Silverman, has also carried petitions for former Yorktown supervisor Michael Grace in his bid for the Board of Legislators, someone who has opposed the state’s Reproductive Health Act. She said New Castle residents should be aware of that as well.

“I think it’s important because national issues are not immune from national politics,” Silverman said. “What happens on the local level is not a separate animal.”