The next time a natural disaster strikes, New Castle officials are prepared for whatever Mother Nature throws their way.

Relying on some of the latest in technology, the town officially introduced two new services last week that it will utilize to help keep the public up to date with critical information during emergencies.

Following a test last Thursday to roughly 8,000 phone numbers, the CodeRED Emergency Notification System is now up and running. The system will send out a robocall to every telephone number it has stored when officials activate the service.

A state of emergency does not have to be called for the town to launch the CodeRED system, said Town Administrator Penny Paderewski. The calls can also be targeted toward specific areas instead of town-wide if there is a localized problem, such as a water main break or a particular road closure.

In the event of long-term outages, there could be a daily update similar to what the Chappaqua School District provided parents in the week following the hurricane or messages that detail the public about shelters, places that might have power and other pertinent information.

“This is not going to be something we’re going to overuse or abuse,” Paderewski said. “It’s expensive to make calls.”

New Castle has contracted with the CodeRED Emergency Notification Systems, which is also the same firm that is responsible for Amber Alert, for $8,300 a year, she said. That provides the town with 22,000 minutes of annual calls.

Lyle Anderson, a volunteer and information technology director who has been helping to assist the town in its efforts to improve communications following Hurricane Sandy, said CodeRED is used by a variety of municipalities in the region, including White Plains, Cortlandt, Somers and nearly every municipality in Fairfield and Litchfield counties in Connecticut. In addition, the Indian Point nuclear power plant uses the system.

Each resident can register up to two telephone numbers. For those who have listed home numbers, the system has already added the information and those residents should have received the Jan. 10 test call. Anderson said people can also put in a cell and/or work phone number. If more than one person in a household has signed up, the home number will only be called once.

Along with CodeRED, the town unveiled a new mapping system that is available on the town’s website to track and display road closures. Anyone can log on to the town’s website at eoc.mynewcastle.org to get an update on closures and why a particular street is closed, Anderson said.

He said the maps will come in handy for residents and first responders.

“Not only can the (town’s) Emergency Operations Center use it to disseminate information to the emergency responders, but they can enter information, they can take pictures, they can verify information and also the public can access information on the website and find out what areas are closed,” Anderson said.

It can also be accessed from mobile devices as well, he said.

Introduction of technology isn’t the only change that has been made. Before the Jan. 8 town board meeting, Anderson and DPW Commissioner Anthony Vaccaro explained that the town has also tightened its policy in collecting and dispensing information.

Following an event such as Hurricane Sandy, typically Police Chief Charles Ferry would be incident commander, but Paderewski would be responsible in relaying information to the public.

For any New Castle resident who has not signed up for CodeRED, visit www.mynewcastle.org and click on the CodeRED box in the upper-left-hand side of the page. Paderewski said alerts pertaining to the town will go through CodeRED; Nixle alerts will be used primarily by the police. 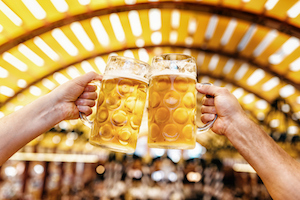 Pleasantville Chamber, Officials Undecided on Whether to Pursue Oktoberfest