When the Armonk Outdoor Art Show celebrates its 60th anniversary early next fall, there will be a new managing director leading the way.

In early December, it was announced that Nicole Blum is replacing Anne Curran, the show’s executive director for the past six years. Blum assumed the manager’s responsibilities as of Jan. 1.

Blum, who grew up in Chappaqua and has lived in Armonk since 2013, started her own public relations firm that same year. Recently, she has rebranded her company, so she is concentrating more on marketing, consulting and event planning.

She said the part-time directorship is a perfect part-time opportunity for her to use her professional background and give back to the community while building on the tradition and the stellar reputation of the event, one of the most acclaimed art shows in the United States.

“It’s certainly not about making any huge changes,” Blum said. “I think I’m approaching this year, my first year, as more of, it’s really about celebrating the 60 years and I think it has been such a cornerstone of the community and wider than the community for 60 years. But I feel that there’s always room to bring in a new audience.”

For example, there are many people who are regular patrons of the show who are likely unaware that it serves as the major fundraiser for the Friends of the North Castle Public Library, Blum explained. Making that connection along with bringing in new sponsors and partnerships can benefit the show and the community, she said.

Blum not only has big shoes to fill in succeeding Curran, but the Armonk Outdoor Art Show is highly regarded among the artists. Typically, the show attracts up to about 180 varied artists each year from across the United States and abroad who create a wide assortment of medium.

A small army of community volunteers help to make the show a reality, although the pandemic forced its cancellation in 2020.

“One of the things that I really learned in a short time as I was preparing to take it over was the respect that the artists who participate really show,” Blum said. “Their feedback is invaluable. They find the art show to be one that respects the artists, works with them the best, is the most organized, and that’s the main goal for me, is to maintain that level and look for ways to improve it.”

Curran, who submitted her letter to the North Castle Town Board on Dec. 3, did not go into detail about her reasons for leaving other than saying it was time to move on.

“With deep gratitude for the experience of directing the Art Show for the past six years, I have decided it’s time to leave my position,” she said. “I know the Show will continue to thrive based on the quality of the event and the extraordinary team of organizers who impart wisdom, honor traditions, and imagine ways to keep improving.”

In accepting her letter last month, Town Board members said they were saddened to see Curran go, but look forward to what Blum can bring.

“It’s hard to imagine that we’d be able to find someone to fill Anne’s shoes but Nicole, from everything I hear, will do a very good job for us,” said Councilman Jose Berra.

New Councilman Matt Milim said he is friends with Blum and is excited that she has stepped up to be the show’s next director.

“She’s going to be really great,” Milim said. “Aside from being unbelievably motivated and intelligent and energetic, she has a background in PR and media and stuff like that so I think she will be a really good asset for the art show.” 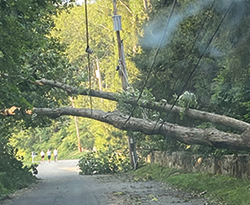