Arts & Entertainment The Examiner
May 6, 2022May 10, 2022 Martin Wilbur Armonk
We are part of The Trust Project

It promises to be quite a summer for Abigail, Zachary and Jeffrey Binder. The three members of the same family from Armonk will be competing at the 21st World Maccabiah Games in Israel starting in early July in three different sports.

The competition, which takes place every four years, is known as the “Jewish Olympics” and attracts athletes from around the globe who have at least one grandparent who is Jewish or who identifies as Jewish.

It may be the first time that multiple generations of the same family representing three different sports will be competing in the Games.

Abigail, 20, a University of Michigan junior and former three-year varsity volleyball player at Byram Hills High School, will be competing in her sport. Zachary, 18, qualified through competing as a fencer at the Division I collegiate level at Columbia University, after following his oldest sister, Sylvie, into the sport. Sylvie Binder also fences for Columbia.

Their father, Jeffrey, 55, competed on his high school and college tennis teams, and after putting his game on hold while working as a lawyer and helping to raise his three children, has been back on the court preparing for this moment.

For Binder’s two youngest children, the opportunity to go to Israel for the first time and compete against athletes from around the world is a special thrill.

“When I learned I was going to Israel with my family, where I would explore the country and develop a closer connection to my Jewish roots, I was thrilled,” Zachary said. “Representing the USA, competing and meeting new people in Israel will make for super exciting summer.”

Although Abigail doesn’t play for the Wolverines, she competes at the club level and serves as an instructor. She was the captain of the Byram Hills varsity team and named all-league in her senior year.

“I thought it was a really cool opportunity and I’m excited that the three of us are going to be going together and have that experience together,” she said.

The trip, which has them arriving in Israel on or about July 3 for about three weeks, will include their entire family. Jeffrey’s sister will be there with her family as well.

For Jeffrey, having his kids be able to tour the country and be in touch with their roots is as gratifying as having them compete. For the athletes under 25 years old, there is a week-long Israel Connect orientation program that brings them to the country’s historical sites. It promises to deepen their Jewish pride and identity through sports.

Although they each had a Bar or Bat Mitzvah, Jeffrey said they were not raised in a particularly observant household. They’ll also get to spend time with their peers and have a better understanding of who they are.

“That’s what I really like. It’s going to deepen their connection to their culture, religion and nation of Israel,” he said. “They’re going to see it all.”

Once the competition begins, they will be scattered about the country, although all events will be within a couple of hours of each other. Fencing will take place in Tel Aviv, volleyball is in Jerusalem and tennis is in Betania.

Jeffrey Binder, who will actually be competing in the 40s age category because there is a dearth of players in that division, said he will be preparing by playing outdoors in Florida to train for the high summer heat in Israel.

“For me, tennis is like a connection to my youth,” he said of his motivation to play. “It’s keeping me young because I started so young so I feel like every time I step on the court, I’m 18 years old again. My knees may differ.”

Abigail, Zachary and Jeffrey agreed that sports serve as an important connection for the whole family.

“I just think that sports have given us a chance to connect and really have these shared loves, and even though we don’t play volleyball (together) or we don’t play tennis, we are very supportive of everyone’s achievements,” Abigail said. 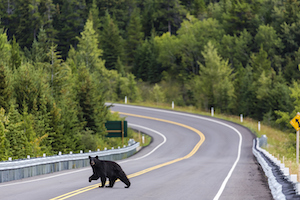 Black Bear Sighted in The Town of New Castle