Skip to content
Government The Examiner
December 3, 2021February 22, 2022 Martin Wilbur 866 Views 4 min read
We are part of The Trust Project

The Mount Pleasant Town Board unanimously approved a commercial vehicle restriction on three key roads that are used as a shortcut, but many residents are also pressing for the town to consider closing off those streets to through traffic.

Town officials agreed last Tuesday night that vehicles of at least 8,000 pounds will be prohibited on Belmont Road, Pythian Avenue and West Stevens Avenue, residential streets that experience heavy traffic volume in large part because they serve as a connection between Bradhurst Avenue and Route 9A.

Concerns were raised by residents of the three roads and nearby side streets shortly after it was learned that the new 153,000-square-foot warehouse and distribution center currently under construction on Route 9A would be an Amazon operation. While those roads have been used as a shortcut by motorists for years, residents fear as development increases, the situation will become unbearable.

In addition to the Amazon distribution center, which is scheduled for completion in the second half of 2023, expansions at the Westchester Medical Center campus and the medical building at 19 Bradhurst Ave. have already caused an impact, according to some residents last week.

Then there is the proposed North 60 project on the Grasslands campus that could add up to three million square feet of medical and science-related uses along with retail space and a hotel.

Along with the weight restrictions, the town will also install signage at key points along the streets, he said.

While most residents who spoke at the Nov. 23 public hearing were appreciative of officials’ efforts, they also urged the Town Board to weigh the closures of those three streets to through traffic except for local residents and deliveries.

Pythian Avenue resident Katheleen Ciano said that the weight restriction would only eliminate about 20 percent of the traffic from the streets based on the types of vehicles that were recorded in the town’s recent traffic study. Furthermore, vans used by Amazon are well under the 8,000-pound limit as are many other delivery vehicles, she said.

“Our street is not an extension of (Route) 9A or Bradhurst (Avenue), nor is it a service road to a highway,” Ciano said. “Please, this needs to stop.”

Shutting off the streets would redirect much of the traffic onto Route 9A and Bradhurst (which is Route 100), roads that motorists should be using anyway, which would add only a few minutes to their drive, said Theresa Gray, another Pythian Avenue resident.

“Drivers choose to take the path of least resistance and the shortest route will always continue to be used, which at the moment is Joyce, Pythian and Belmont,” Gray told Supervisor Carl Fulgenzi and the councilmembers.

Others said there are numerous school bus stops along those streets, and it has become increasingly common for drivers to ignore the required stops for buses that are picking up or discharging children.

Mark Zulli, who also lives on Pythian Avenue, said residents face dangers not just because of the volume but because of speeding and other driving infractions by motorists. When one of his three sons was younger, he was nearly struck by a car when crossing the street to board his school bus.

“If you don’t take the steps to safeguard the residents of this area, your constituents, then I will be back here to blame some of you should there be a tragedy due to inadequate safety measures,” Zulli said.

Philip Place resident Richard Wisniewski said a key problem has been that the review of various developments and impact on traffic have been looked in a “disjointed manner” rather than as a regional issue. That has happened again with the ongoing Draft Environmental Impact Statement (DEIS) for North 60 and more attention should have been paid to the Amazon facility traffic.

“If you’re going to do the study, Mr. Fulgenzi, do it right and do it in a holistic way with all that’s been going on in the southwest corner of Mount Pleasant, which is really the issue,” Wisniewski said.

Fulgenzi repeatedly said the weight restrictions and signage is just the first step in trying to find solutions.

“We’re going to do this right,” Fulgenzi said. “Not doing this right would be to throw up signs and walk away. That’s not what we’re doing here. Like I said before, this is the first step.”

Smyth said the town will study what effect closing Belmont, Pythian and West Stevens would have on other area roads. He said the state Environmental Quality Review Act process does not permit the town to take an unsafe condition and shift it to another area.

“Our task is to take the traffic, analyze the traffic, notify the state that we are going to be impacted by this traffic to see how much the level of service has changed to see how the operations are,” Smyth said.

As part of the Amazon warehouse and distribution center, the Planning Board required a traffic signal to be installed at Belmont Road and Route 9A. 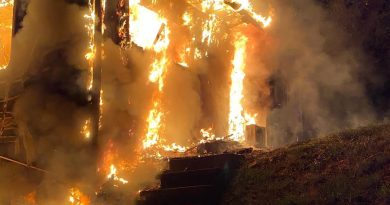