For Mount Kisco Mayor Michael Cindrich, Flavio Benini wasn’t only a World War II hero, but a man to be admired throughout the village.

“Flavio was, more or less, a role model for me as a community member but also as a police lieutenant with the Mount Kisco Police Department,” Cindrich said. “He was a fixture at church at St. Francis of Assisi. He always was productive and had a kind word to say about the residents of the village, but his history of combat was extraordinary.”

All of those qualities was why Cindrich selected Benini last year as the village’s representative for state Sen. Greg Ball’s 40th Senate District Veterans Hall of Fame. On Sunday, at the American Legion Hall in Mount Kisco, Benini, who died last July 11, at 95, was posthumously honored. About 10 other veterans who served in World War II, Korea or Vietnam from throughout the district who had been similarly recognized in their hometowns were also on hand for the ceremony.

Benini’s service in the military reads like a real life action figure. He served for five years in the 127th Engineer Battalion, 11thAirborne Division, of the U.S. Army in the Pacific during World War II. He earned the Silver Star, two Bronze Stars, the Purple Heart, the American Campaign Medal, the Asiatic Pacific Campaign Medal with a Bronze Arrowhead, the Victory Medal and the Philippine Liberation Medal.

His heroics didn’t stop when he returned home. As a longtime member of the village’s police department, he served the community with distinction during a long career on the force. He also continued to save lives. Robert Lipsky, who married Benini’s niece, was on duty with him the night he rescued a woman who was stuck in a car at the Main Street railroad crossing with a southbound train bearing down on her.

“He ran from the police car and she was frozen behind the steering wheel,” Lipsky recalled of the man many called “Flat.” “He had to actually punch her and he dragged her out of the car, into the northbound side of the tracks when the train hit the car and drove it down to the railroad station.”

Accepting the award on behalf of Benini was his daughter, Victoria Mantie.

Benini had also volunteered for the Kiwanis Club, the American Legion and the Italian-American Club.

Municipal officials in 27 municipalities throughout the 40th Senate District each nominated a deserving veteran from their community last year to be inducted into the hall of fame. Ball, chairman of the Senate Committee on Homeland Security and Veterans Affairs, also introduced Eugene Parrotta of Croton-on-Hudson as his nominee for the 2012 New York State Veterans’ Hall of Fame.

Ball said all of the inductees were men who served their country with distinction. Today, youngsters don’t have to watch a movie or television to learn about what real sacrifice meant, but simply talk to any one of the veterans.

“Hopefully, because of what these men have done, they will return to a country that respects them with the dignity that they deserve and provide them with services that were promised when they raised their right hand and were willing to fight and die for this great country,” Ball said.

County Executive Rob Astorino lauded the honored veterans and asked those in attendance to keep today’s soldiers in their thoughts.

“I thank you from the bottom of my heart for all that you have done and to all the soldiers that are out there today somewhere in a foreign land or training here in the U.S. for a day that might come,” he said. “We have to pray for them all the time that God brings them home safely.” 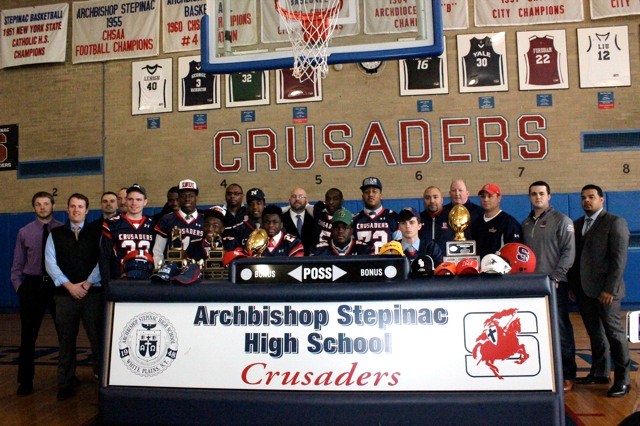 Memorial Day Parades and Ceremonies Scheduled in the Area