Skip to content
The Examiner
June 1, 2020 Martin Wilbur Mount Kisco
We are part of The Trust Project

Mount Kisco homeowners who are experiencing a pandemic-related financial hardship and who qualify for a deferment will be allowed to postpone payment of their village property taxes without penalty until Aug. 15.

The Village Board will hold a public hearing Monday night with the intention of passing local legislation that is similar to what the county approved earlier this spring. A section of the real property law permits a municipality to enact such legislation.

The first-half fiscal year taxes in Mount Kisco are due by June 30. At the county level, taxpayers who qualify under the deferment plan faced an Apr. 30 deadline and have until July 15 to pay their taxes in full with penalties of 0.5 percent in May or 1 percent from June 1 to the revised deadline.

“It makes total sense to me that we should go ahead and give this relief to people provided it is truly a result of specifically some kind of COVID-related personal disaster,” said Village Trustee Peter Grunthal.

To qualify for the delay, homeowners must use the house as their primary residence, must receive a school-tax STAR program exemption and pay their taxes directly to the municipality and not through an escrow account, said Mayor Gina Picinich.

Additionally, the highest income earner in the house must have been laid off, furloughed or lost employment because of the coronavirus state of emergency or if they are self-employed, own a business or have had a substantial loss of income through a government-ordered closure of certain types of operations, she said.

Village officials expressed some concern about whether the municipality’s cash flow could be jeopardized. Mount Kisco Treasurer Robert Wheeling said the village currently has a fund balance of that is about 25 percent of its $23.3 million budget. That represents about three months of village expenses if no money came in, he said.

“From my point of view, as a cash flow, as a loss of revenue, I think it’s very doable,” Wheeling said.

There were 16 qualified Mount Kisco property taxpayers who applied for the deferment, and even if that number doubled, the village would easily be able to handle the delay in receiving that revenue, added Village Manager Edward Brancati.

Last year during a comparable period, there was $24,309 collected in penalties for late payments from the entire village. Wheeling said with interest rates at historic low levels, the delay of revenue would cause a negligible loss of interest income.

The village is able to cover for delinquent taxpayers every year, as well as front the money owed the county and school district, typically about $1 million a year, according to Wheeling.

“We have certain taxpayers we’ve carried for years,” Brancati said. “We have to wait three years before you can foreclose. So we have some people we’re carrying for a significant period of time while we make the school district and the county whole. That happens all the time.”

While a relatively low number of taxpayers qualify for the deferment, Village Board members said they wanted to do what they could to help the community. 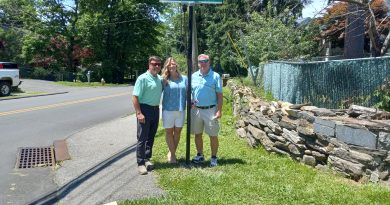