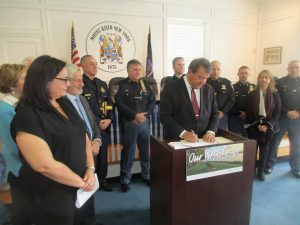 County Executive George Latimer signs the new five-year Inter-municipal Agreement to provide police services to Mount Kisco through 2024. The Village Board is expected to ratify the agreement next week. Mayor Gina Picinich, left, looks on along with village trustees Jean Farber and Peter Grunthal and members of the county police force.

Mount Kisco has agreed to extend its police services contract with Westchester County for another five years, continuing the arrangement that began between the village and the county police in mid-2015.

Picinich said it was an easy decision for the village to sign on for another five years because the service has been outstanding while saving Mount Kisco an average of about $500,000 a year.

“We’ve received very forward-thinking strategies on public safety. We also get extra resources that include the most recent technology,” Picnich said. “In addition, we have trained officers, true professionals, who have become an integral part of our community.”

On June 1, 2015, 24 members of the old Mount Kisco Police Department were consolidated into the county police in one of the most significant service-sharing moves in Westchester. The mayor said it was “a bold and controversial” decision at the time but the county police have provided highly effective community policing. The village has received more patrols, greater expertise and participation from the county for special events, such as the Cops and Cones program in the summer, where residents attend a block party-type event in the parking lot near the Green Street firehouse, and Coffee with a Cop.

Under the terms of the new contract, which takes effect Jan. 1 and continues through 2024, Mount Kisco will pay about $6.3 million in 2020 with 2 percent cost escalation in each of the following four years, Picinich said. Meanwhile, the county will provide increased foot patrols, creating a more visible presence in the community, a dedicated youth officer and at least one officer on duty at all times who is fluent in Spanish.

There will also be visits to Neighbors Link, the senior center, Mount Kisco Elementary School and the Boys & Girls Club.

The Village Board is expected to approve the contract at its next meeting on Dec. 16.

Latimer said he is grateful that negotiations for the new contract have been completed and that the successful partnership between the village and the county will continue.

“This shared services agreement is a tremendous example of how collaboration and shared services can create both significant savings and improved levels of service,” Latimer said. “Mount Kisco, quite simply, has more police protection than previously and at a lower cost than maintaining a municipal police department. That’s a winning formula for the residents and taxpayers of the village.”

Chris Calabrese, the chief inspector for the county police, said despite the high-quality policing and cost savings, the village needed to be convinced that the arrangement would work long term.

“One of the things that local police departments and local governments are afraid of is they lose that sense of home,” Calabrese explained. “The individual police officers, that sense of community that they have in their jurisdictions, and we have successfully made the community ours.”

Latimer said that the county stands ready to assist other municipalities in service sharing agreements, although he acknowledged that most other communities are happy with their local police. A few communities have also been exploring merging their local departments, he said.

Both Latimer and Picinich applauded their predecessors, former county executive Rob Astorino and former mayor Michael Cindrich, for their decisions in advancing what Picinich called “a bold and controversial” decision at the time.

The village and the county had been in discussions for close to three years after the proposal was first explored until the initial IMA was signed.

“At the center of effective community policing is building trust and establishing relationships,” Picinich said. “To that end, the county has truly been extraordinary partners for the village.”