There were eight speakers who participated in the May 17 public hearing, although some people believed that the proposed law isn’t stringent enough.

Barker Street resident Patricia Lee, who lives in an apartment complex, said the noise the landscapers make from the machines is unbearable. There is little room between buildings, which helps to amplify the noise and pollution.

“We can’t afford this health hazard,” Lee said. “I mean, if you’re in an individual house, it’s bad; if you’re in an apartment building, it’s horrendous. So, I’m just pleading that we get this moving and we get it moving quickly.”

Village Trustee Peter Grunthal and resident Lilian Burgler first pitched the plan to the Village Board about two months ago citing the noise and air pollution created by gas-powered leaf blowers, which contribute significantly to carbon emissions.

Under the proposal, which has had some revisions since Grunthal and Burgler delivered the initial presentation, gas-powered leaf blowers can be used from Sept. 15 through Apr. 30. Two-stroke leaf blowers will be prohibited in Mount Kisco after Dec. 31, 2024. Two-stroke machines are considered more toxic because motor oil is combined with gasoline to operate them, as opposed to four-stroke blowers that only use oil for lubrication, Grunthal said.

Commercial entities, including landscapers, would be able to use the gas-powered blowers from 8 a.m. to 5 p.m. Monday through Friday and 8 a.m. to 1 p.m. on Saturdays. Commercial outfits would not be allowed to use the machinery on Sundays and holidays.

Residents will have a slightly longer period to operate their leaf blowers – from 8 a.m. to 7 p.m. Monday through Saturday and 9 a.m. to 1 p.m. on Sundays and holidays.

There are no limits on electric leaf blowers.

To accommodate landscapers who work on larger properties, most notably the condominium complexes in the village, more than two leaf blowers being operated simultaneously will be prohibited on less than two acres.

“Who this is going to affect are people who are out there at full throttle, who are using their leaf blower for half an hour, 45 minutes, two hours, three hours and that does happen,” Burgler said. “So this is to understand how this would actually play out.”

Resident Robert Liebman complimented the board for considering the legislation, although he was one who said the proposed law is too lenient. He said all gas-powered leaf blowers, two-stroke and four-stroke, should be prohibited by next year.

Furthermore, all leaf blowers should not be allowed except in the fall and in April. The Village of Larchmont has regulations with similar restrictions, Liebman said.

“I think Mount Kisco should pass a law something like that and not what’s being proposed because it’s just way too weak,” he said.

John Rhodes, chairman of the Conservation Advisory Committee, commended officials for considering the proposal to improve the lives of residents, particularly the most vulnerable.

He said there’s no reason to jeopardize residents’ health and quality of life.

“We strongly advise the village to pass this legislation because even though we think it may not be as strong as it could be in its current form, passage and effective enforcement will make a significant improvement in the health and well-being of everyone in Mount Kisco, but especially the children, the elderly and our less affluent residents,” Rhodes said.

The only member of the landscaping community to speak was Dan Devanthal, owner of Mowgreen, a Fairfield, Conn.-based lawn care company that has used only electric equipment for 16 years.

Devanthal said there is effective electric equipment that performs comparably to the gas machines. He keeps extra batteries on hand in case his crews need them. Many times, his customers allow his workers to charge their electric leaf blowers if needed.

“The landscapers think they need the biggest, fastest blower in the hands of four people like an infantry line to strip the property end to end, and people are losing topsoil,” Devanthal said.

One resident who voiced a bit of skepticism was Leonard Street resident Eva Versaci. While Versaci said she appreciates officials’ concern for residents’ health and the environment, she asked the village to consider a buy-back program for people who recently purchased gas-powered blowers.

Also, living near Guard Hill, she said she was concerned that if larger developments in excess of two acres were allowed to use more than two blowers at a time, she and her neighbors might suffer while most other areas of town would benefit.

Mayor Gina Picinich said she would like to hear from a greater cross-section of people in the village, including more landscapers, when the public hearing is scheduled to resume at the board’s June 7 meeting.

“It’s really, really important that the community share their thoughts,” Picinich said. “That’s absolutely true. We need to hear from the community to understand the impacts on them.” 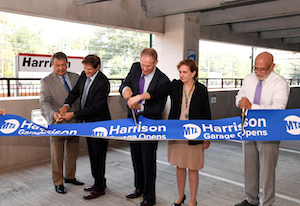