Skip to content
Government The Examiner
December 29, 2021February 21, 2022 Martin Wilbur 593 Views 2 min read
We are part of The Trust Project

The owner of another prominent property in Mount Kisco has reached a settlement with the village to significantly reduce their assessment and receive a refund from the village, the Bedford School District and Westchester County.

SL Mount Kisco LLC, one of three entities listed as the owners of the property vacated by Modell’s that also owned the now-defunct sporting goods chain, will receive a refund of $53,802 from the local government covering a five-year period from 2016 through 2021 after challenging the village’s assessment earlier this year in state Supreme Court. Roughly half of the 21,155-square-foot retail building at 154 Main St. is still occupied by Party City.

“We never like to give money back but this is one of the situations where we have to calculate what’s the best way to approach this,” said Mayor Gina Picinich.

Village Attorney Whitney Singleton said that Mount Kisco reached a settlement with the three limited liability companies to reduce the property’s value from $5.25 million for 2016, to $5.2 million for 2017, to $5 million in 2018 through the first half of 2020 and to the current $4.3 million since June 2020.

Modell’s announced its bankruptcy in March 2020 and vacated the premises by June of last year.

Modell’s appraisals contended that over the five years the property value ranged from $3.7 million down to $3.4 million, Singleton said. Mount Kisco’s appraisal pegged the value of the property from $5.64 million to $4.63 million.

Singleton said that the value is frozen at the new negotiated level until the owner makes a major change to the property or is able to have at least another 25 percent of the building occupied. If one of those scenarios occurs, then the village would be allowed to reassess the property, he said.

“The problem is you don’t want to be stuck at that $4.3 million value going forward,” he said. “However, as you can tell by the current occupancy, the building is only about 50 percent occupied.”

Modell’s paid $6.25 million for the property at auction prior to its 2016 move into the space. The same location on the corner of Green Street had been empty for about five years after another chain retail business, the old Borders bookstore, went bankrupt in 2011.

In his letter earlier this month to the Village Board, Assessor Roger Miller called the settlement “reasonable.”
“In our opinion this settlement is reasonable and favorable to a potential trial, given market conditions and the specifics of this property,” Miller stated. “Retail rental rates have declined and the vacant space at this property is larger than typical and more difficult to lease than smaller spaces. We will be able to review and potentially increase the assessment when the building is re-leased.”

In September, the Village Board approved a settlement with the Mount Kisco Country Club for the portion of its land within the village.

Volunteers Sought to Sign Up for Sept. 11 Day of Service Projects 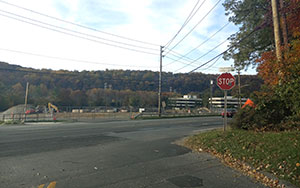