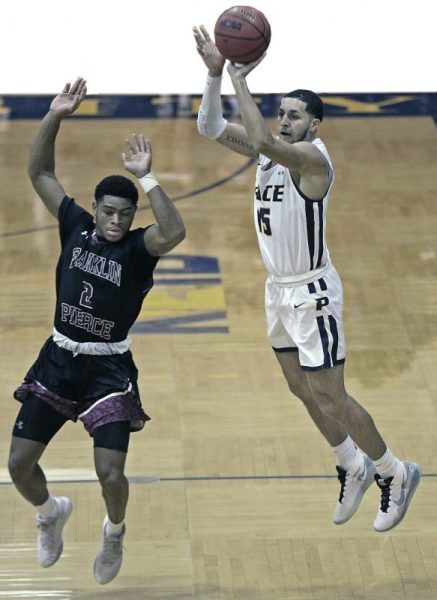 Tyrone Cohen Jr. fires up his game-winning 35-foot shot
at the buzzer that gave Pace a win over Franklin Pierce.

With the final precious seconds ticking off the clock last Wednesday evening, Pace University’s Tyrone Cohen Jr. caught a pass from teammate Bryan Powell along the left sideline, took one dribble across the midcourt line and launched a nearly 40-foot heave toward the basket that was destined to be remembered.

In an instant, Cohen Jr.’s desperation shot just before the buzzer sounded wound up banking off the backboard and right through the rim, sending the entire Setter team spilling on top of him in a wild celebration that would soon be replayed on television sets across the nation — duh-duh-duh, duh-duh-duh — as ESPN SportsCenter’s # 2 play of the day.

The 3-point fling from Cohen capped a Pace comeback from a 15-point second-half deficit and provided the Setters with a 75-72 victory over the visiting Franklin Pierce Ravens at the Goldstein Fitness Center. Trailing by five points with under 90 seconds remaining, Pace closed the contest on an 8-0 run to improve to 14-7 this season and even its record in the Northeast-10 Conference at 6-6.

“I’m just really proud of our guys for staying the course,” said Setters head coach Matt Healing shortly after his team had completed its huge comeback. “That was a tough game against a really good team. They’ve been playing really well, coming off a big win. They beat Adelphi by 30 points last game. So we knew we had our work cut out for us.”

Cohen Jr. had been just two for seven from the field before his game-winning basket. The Setters went scoreless for the first five minutes of the second half, missing all four of their shots and turning the ball over three times, and soon found themselves facing a 53-38 hurdle with 14 minutes remaining. But a 22-7 Pace run that began and ended with buckets from Austin Gilbertson eventually tied the game and set the stage for the heroics to come.

“We could’ve folded, and we didn’t,” said Healing. “It’s easy in a game like that, against a good team, down by 15. We did the things we needed to do to win the game. Obviously people will talk about that last shot for a long time. But we put ourselves in that position with good defense, with great teamwork, staying tough. I just think about big deflections, big jump balls that kept us in the game. Just the small things that added up to get us in position to win the game.”

After six lead changes in the opening 20 minutes, the Setters found themselves trailing 38-35 at halftime. But the Ravens scored the first nine points of the second half and their run became 15-3 following back-to-back 3-pointers from Doyin Fadojutimi and Falu Seck. The Pace revival finally began when Gilbertson slipped into the paint for a layup with 13:15 remaining.

The Setters soon got another layup by Christian Adams and then Peyton Wejnert, who finished with game-highs of 19 points and nine rebounds, cut backdoor for a basket that made him the ninth Pace player to reach the 1500-point plateau. A pullup jumper by Gilbertson near the foul line cut the Franklin Pierce lead to 53-46 with 11:38 to go.

Pace managed to draw even when Adams converted on a pair of free throws with 8:21 left on the clock. Gilbertson’s short jumper 30 seconds later tied the game again at 60 apiece before the Ravens rattled off six straight points to seemingly take control once more. An acrobatic fast-break layup from Fadojutimi gave the Ravens a 68-63 lead with 3:35 remaining after Wejnert, battling for offensive rebounds, had twice been denied underneath at the other end and Gilbertson came up empty diving headfirst for a loose ball.

Franklin Pierce, 12-6 at the start of the evening and second in the NE10’s Northeast Division standings, still held a five-point margin after a basket by Seck with 92 seconds left. Wejnert made two free throws with 1:20 to go, and then his old-fashioned 3-point play with 32.5 seconds on the clock tied the game at 72-72.

With possession of the ball and just a two-second difference between the shot and game clocks, Franklin Pierce had a big advantage. But Isaiah Moore spun into the lane a bit too early and his shot with five seconds left caromed off the rim. The Setters’ Powell grabbed the rebound, quickly dribbled up the floor and found Cohen Jr. ahead to his left.

With one bounce of the ball, the lefty-shooting Cohen moved past midcourt and sent the ball sailing toward the basket from well beyond the 3-point arc as the final buzzer was sounding. When the ball banked off the glass and into the basket, he was immediately greeted by his giddy teammates, who all went sprawling like dominoes onto the floor in their instant euphoria.

“We had a timeout there,” said Healing about a last-second huddle that never happened. “To call a timeout when we were on the run, to let them set up a defense, it’s just a tough scenario that you’ve got to kind of read on the fly. And obviously it worked out for us.”

In the aftermath of the remarkable finish, Healing wasn’t quite sure where to place the win over the Ravens among his most important since coming to Pace five years ago. Right now, he’s more concerned about the postseason implications of the victory.

“Obviously we’ll all think about the game-winning shot at the buzzer,” he said. “Those are priceless. You remember the buzzer-beaters, for sure. It’s a big one for our guys in the course of the season. We’re in a playoff hunt and jockeying for position and seeding within our conference. Maybe at the end of the year you’ll be able to kind of savor where this one ranks in the grand scheme of things. But a win’s a win. It’s a special one. It’s a hard-fought one. It’s a gratifying one. A fun night here on campus, and hopefully our fans enjoyed it.”