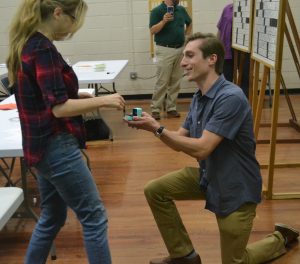 A few amorous words can suddenly change the moment – especially when they are totally unexpected.

That’s what happened at the end of the 22nd Westchester Crossword Puzzle Tournament at the Westchester Table Tennis Center in Pleasantville Friday night.

About 50 players sat poised to try their hand at taking home the top prize. But for the championship round there was something different, a specially commissioned puzzle.

Ten months earlier New York Times crossword puzzle editor Will Shortz was contacted by actor Brendan McGrady who asked if there was someone who could help him create a personalized puzzle. Shortz put him in touch with Doug Peterson, a professional crossword constructor in Pasadena, Calif., and they worked together to create a puzzle with a wedding theme.

McGrady knew his girlfriend, Amanda Yesnowitz, would compete in the tournament. Yesnowitz, an acclaimed lyricist for musical theater productions, is a nationally-ranked crossword puzzle solver whose debut crossword appeared in the magazine section of The New York Times in 2012.

Throughout the tournament, Yesnowitz and McGrady, who live in New York City, sat near the front of the room. At the end, the three finalists, Jeffrey Schwartz, Ken Stern and Glen Ryan, tackled the final puzzle on large boards on easels, while everyone else in the room who was given a smaller-sized handout of the puzzle could attempt to solve it as well.

Answers included Amanda and engagement, while the word ring was used repeatedly as part of larger words or phrases. Ryan, who completed the championship puzzle in record time – 5 minutes and 23 seconds – finished first, followed shortly afterward by Stern and Schwartz.

Shortz stepped up to hand Ryan his trophy and turned to the audience and explained about the commissioning of the puzzle and his connection with Peterson.

“Doug Peterson wanted me to tell you this puzzle was a request from someone named Brendan. I wonder if anyone knows anything about this,” Shortz said.

“I think I do!” McGrady shouted as he bounded to the front of the room. “This is a great puzzle and I think a great puzzle is like a great relationship,” he said. “It’s challenging, you learn something from it, hopefully there is room for lots of wonderful word play, and most importantly, it should be an absolute blast to go through.”

McGrady held a small shopping bag and said, “But the puzzle’s not done yet. I’m going to need Amanda to help me with the last piece. This puzzle is all about rings and boxes, well I have the last piece right here.”

He held up a ring box and motioned to Amanda to come up.

“Amanda? Will you help me solve this puzzle?”

Completely surprised and left speechless, Yesnowitz giddily walked up to McGrady, who got down on one knee and held the open ring box out to her. There was thunderous applause as she put the ring on and they embraced.

Shortz, who was standing next to the couple and beaming, said, “Well, that is a first.”

The popular tournament was the brainchild of Shortz, a Pleasantville resident and longtime crossword puzzle editor of The New York Times and puzzle master for NPR’s “Weekend Edition Sunday” since 1987. He also owns the Westchester Table Tennis Center.

The tournament benefits the Pleasantville Fund for Learning that provides grants each year to the Pleasantville School District. The evening draws serious crossword enthusiasts from the tristate area who are adept at speedily completing the puzzles.

Players of all ages compete, with trophies and book prizes awarded to winners in various categories. Before the finalists were announced, Shortz awarded trophies and puzzle books to the best overall solvers, as well as the best solvers who are 25 and under, 60 and over, the best Pleasantville resident, and the best first-time contestant.

Prizes were also given to the best solvers working in pairs. Book prizes were courtesy of St. Martin’s Press.