Skip to content
The Examiner
February 11, 2020 Martin Wilbur Armonk, North Castle
We are part of The Trust Project

The Mariani Gardens parcel in Armonk has been listed for sale after a zoning change and special use permit were secured last year to build a 43-unit residential project at the site.

A listing appeared last month on the website www.crexi.com advertising the 4.14-acre lot at 45 Bedford Rd for sale. Presented by Cushman & Wakefield’s Capital Markets Group, terms for any transaction have not been defined and the listing asks for anyone interested to request their “own specific terms when submitting a non-binding offer.”

Messages left for attorneys Anthony Veneziano and Mark Miller, who have previously appeared before the Town Board on behalf of applicant 45 Bedford Road LLC, were not returned.

Supervisor Michael Schiliro said he wasn’t overly concerned about the possibility that the property could change hands because any new owner would have to build what was approved or ask for changes in the application. He also said that market forces would likely determine whether the project gets built.

The plans call for luxury rentals that include four four-bedroom units in two structures closest to Bedford Road, a 16-unit structure on the side near where the empty greenhouse for Mariani Gardens stands and a 23-unit building in the back of the property closest to Route 22 that will contain five affordable apartments.

“I think a majority of the board would like it developed as it was approved but that’s where the government can’t force anybody to do anything or build anything,” Schiliro said. “They’ve got to do it on their own.”

The Town Board’s public hearings, particularly for the rezoning of the property from Nursery Business to a multifamily residential zone last June, featured contentious debate. Some of those against the plan argued that 43 units on just over four acres was not the limited residential development that had been outlined in the 2018 Comprehensive Plan update.

In October, when the Town Board approved the special use permit, Miller said he hoped that his client could obtain site plan approval from the Planning Board within six months. However, there have been multiple Planning Board meetings since then and the application has yet to appear on an agenda.

In addition to site plan approval, increased capacity for the town’s Sewer District #2 and Water District #4 would need to be in place in order for a building permit to be issued.

Councilwoman Barbara DiGiacinto said selling a property that carries approvals is almost always an option for a developer. The town has no authority to dictate who could own the land.

“Long before I was on the board, when I would see an application that wasn’t just a single-family dwelling, I would always look at it that the property owner has the right to flip it,” DiGiacinto said. “That’s not unusual to see that happen. It actually happens historically and that’s just a right.” 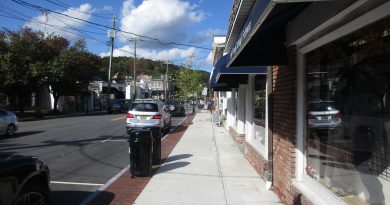 Town Board Hears What is Included in Downtown Chappaqua Charrette