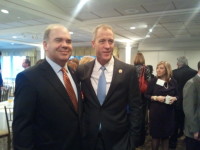 As one of 84 freshmen in the House of Representatives, Congressman Sean Patrick Maloney (D/Cold Spring) believes the time is now to change the dysfunctional government in Washington D.C.

“There are 49 new Democrats in the freshman class and there are around 40 new Republicans. That’s one-quarter of the House of Representatives. That’s a great thing,” Maloney said to members of the Business Council of Westchester Friday morning at Abigail Kirsch in Tarrytown, one day after officially being sworn-in to office.

Maloney, 46, unseated Congresswoman Nan Hayworth (R,C/Bedford) in November to represent the 18th Congressional District, which covers all of Putnam and Orange counties and parts of Dutchess and Westchester counties, including Somers and a segment of Yorktown. He worked as a senior adviser to President Bill Clinton between 1997 and 2000, when he said the country was in much better financial shape.

“If we kept the policies in place when Clinton left office, the national debt would have been zero last year,” Maloney said. “We’ve got ourselves in a situation in this country where we’re like a family with two mortgages. You can’t tax your way out of this. You can’t spend your way out of this. There’s no silver bullet. We’ve got to get the line moving in the right direction.”

To be able to eliminate the national deficit within the next 20 years, Maloney said several broad base reforms are necessary, including tax, entitlement and immigration reform.

“We need to retool the tax structure for a modern community,” he said. “We need to have a simplified system. These cliffs will force us into some sort of action as well. I would like to see an intelligent deal. There’s reason for hope. We’ll get ourselves out of this.”

As a member of the Transportation and Infrastructure Committee, Maloney said he would focus on obtaining the billions of dollars needed to upgrade roadways, bridges, water lines and power grids. He also discussed his preference to shut down the Indian Point nuclear power plants in Buchanan within seven years.

“You would never put a nuclear plant there today. There’s no evacuation plan that works,” he said. “We all agree it’s going away in 20 years. I’m not one of those guys who want to just turn the switch off. That’s completely irresponsible. We need to eliminate a risk that could be a catastrophic event at that facility. We need to invest in green energy, geothermal and renewables.”